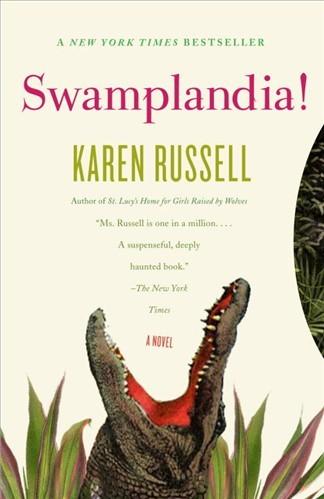 In the Florida Everglades, gator-park Swamplandia! is in trouble. Its star performer, the great beauty and champion alligator-wrestler Hilola Bigtree, has succumbed to cancer, and Ava, her resourceful but terrified 13-year-old daughter, is left in charge with her two siblings.
But Ava’s sister has embarked on a romantic relationship with a ghost, her brother has defected to a rival theme park, and her father is AWOL.
And then a mysterious figure called Bird Man guides Ava into a perilous part of the swamp called the Underworld, promising he can save both her sister and the park…
Swamplandia! was longlisted for the 2011 Orange Prize and shortlisted for the 2012 Pulitzer Prize and 2013 IMPAC Dublin Literary Award.

Karen Russell’s debut novel is not effortless, breezy, charming, fresh, or much else that much-hyped debut novels are often reported to be. Instead, Russell’s dark tangle of a book demonstrates that she is a Writer with serious intentions and some very unusual material.

It all starts innocently enough at Swamplandia!, a DIY theme park where a family of not-Indians called the Bigtrees trade in live animals, kitsch, and the potential for grievous bodily harm. Those familiar with Australia’s giant banana and World’s Largest Prawn will feel right at home amongst Swamplandia’s alligator wrestlers and airboat rides. When the star gator-wrestler dies and the park flounders, however, her children and the story seep out of the park and into south Florida’s procession of weirdness. Among its attractions: an alibino girl who elopes with a ghost; a stunningly accurate picture of the ritual unpleasantness of both teenage boys and their poorly paid hospitality jobs; a tooth-and-nail fight started by a senile resident of a nautical-themed floating nursing home; and the state of Florida itself, perhaps the closest a real place can come to a parallel universe.

Russell, whose first book was a collection of short stories, winds her novel just as tightly to fit in all her best details and anecdotes. Her collection of staged oddities is fascinating, but the novel slows down and nearly falters as chapters alternate between unconnected episodes from very different paths of two Bigtree siblings. With some effort, however, the novel pulls loose and one-ups its oddities. Russell’s novel cinches shut as a coming of age story – the fairy tale ends, the world grows weird and briefly hellish, and closure, when it finally comes, is as welcome, beautiful, and almost inevitable as making it through adolescence in one piece.

Luke Meinzen is an intern at Sleepers Publishing and a freelance writer.

END_OF_DOCUMENT_TOKEN_TO_BE_REPLACED

In the Florida Everglades, gator-park 'Swamplandia!' is in trouble. Its star performer, the great beauty and champion alligator-wrestler Hilola Bigtree, has succumbed to cancer, and Ava, her resourceful but terrified 13-year-old...

The Bigtree alligator wrestling dynasty is in decline and Swamplandia!, their island home in the Florida Everglades and gator-wrestling theme park, is swiftly being encroached upon by a sophisticated competitor known as The World...