Emma Forrest’s Royals is a book that twirls you around, swings you up into the air and then fells you at the knees, before pulling you up and doing it all again. It is a tale as old as time about two people from opposite worlds who meet and despite everything bond and bond hard. When working-class Steven ends up in hospital after his father hits him, he meets Jasmine – a wildly chaotic and charismatic heiress who sweeps the youth into her hedonistic world. Ideas about friendship, mental health, abusive relationships and the transformative power of someone believing in you more than you are all explored here. Royals is the kind of read that is very fun and very clever at the same time – under its glossy sheen lies a deep world of complex emotions and relationships that Forrest elegantly articulates.

Ellen Cregan is reading The Secrets We Kept by Lara Prescott

Over the holidays, I read Lara Prescott’s The Secrets We Kept. There are so many elements to this impressive debut novel – it’s at once a spy novel, a queer romance, and a very interesting retelling of moment in literary history. There are two narratives to this book – one taking place in Russia, telling the story of how Boris Pasternak’s legendary novel Doctor Zhivago came into being. This Russian section is told from the perspective of Olga Ivinskaya, the real-life mistress of Pasternak. The other narrative revolves around the lives of a group of women working for the CIA in the 1950s, one of whom becomes embroiled in a plot to smuggle _Zhivago _back into Russia (where it was initially not allowed to be published) to destabilise the Soviet government. This is such a fun book, and a great addition to the usually hyper-masculine spy genre from an exciting new female author.

Are you interested in reading about the history of fabric? No, you say? You might want to re-think that, because The Golden Thread is one of the most entertaining I’ve read in a long time. British author, journalist and historian Kassia St Clair is a born storyteller with a rare ability to bring history alive in an effortless way. The book is broken into 13 discrete sections covering different points in history; from prehistoric weaving to the Silk Road, woollen Viking sails, high tech sports fabrics and NASA suits. She’s really sold me on the idea that historians have neglected textiles and their manufacture for far too long, and played down the massive importance that they play in human societies. Just thinking how much fabric and weaving has entered our lexicon, myths, religions, personal identities, societal structures, economies and technology has totally blown my mind. If you like to stretch your mind in all directions, please pick up this fascinating book.

I’m listening to Holy Holy – literally any song of theirs. This Australian band was supposed to play at the Lorne Falls but when it was cancelled, they put on a pop-up gig in Richmond instead and donated their proceeds to the bushfire relief efforts, like many others who were also supposed to play at the festival. They’d been on my radar for a while in the way that they’re on the radar of anyone who’s listened to Triple J in recent years, but nabbing a spot in the crowd at this surprise gig has shot them straight to the top of my Spotify playlist. They’re fresh Aussie indie rock with some magic lyrics and a vocalist with a dreamy voice. Songs to get you started: ‘Elevator’, ‘If I Were You’, and everyone’s favourite, ‘True Lovers’. 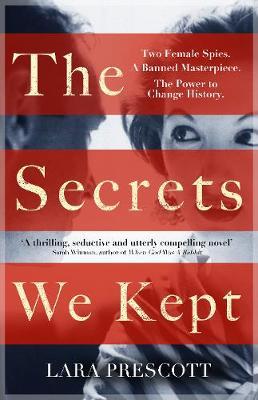 The Secrets We Kept: The sensational Cold War spy thriller