What I Loved: The Rings of Saturn by W.G. Sebald

At certain times a book is able to take hold of you in such a way as to direct the angle of your life for a while. W.G. Sebald’s The Rings of Saturn did this for me when I first discovered it a few years ago. I still think it’s the best work of fiction I’ve ever read.

Nominally the account of a long walk, which the narrator once took along the coast of East Anglia, The Rings of Saturn might be better thought of as a sort of post-holocaust Arabian Nights, in which stories open onto stories, in which reminisces, dreams and unreliable historical accounts become entangled in such a way that is difficult, at first, to grasp (as the narrator himself jokingly hints) ‘the hidden, horrific, yet at the same time quite meaningless point of the narrative’.

From the forlorn English coast we move – tangentially, as a dream moves – through a discussion of Thomas Browne’s missing skull to a description of herring fisheries in the seventeenth century, from there to the relationship between the Polish ship captain Joseph Conrad and the gay Irish activist and poet Roger Casement and then on to an account of the devastation of the Congo, to the Taiping Rebellion and the opening of China. We’re halfway through the book by this stage, and not much has happened in real time. Sebald’s narrator has ambled along a cliff, witnessed a couple making love on the beach below, noticed a bridge and visited his ‘favourite haunt’, the Sailors’ Reading Room in Southwold, where he is in the habit of leafing idly through old ship logbooks, while the ‘muffled sound of the sea’ competes with ‘the slight scratching noise made by a (billiard) player priming his cue and the short puff when he blows off the chalk.’

There is a faintly comical tension between the grand tragedies of history and the insubstantial, almost ghostly moments that comprise ordinary time. The narrator plods on, the flat coast stretches into the distance and yet earthquakes, suicides, volcanoes and imaginary beasts somehow abound. Gradually we realise ‘how everything is connected across space and time … dates of birth with dates of death, happiness with misfortune, natural history and the history of our industries’. The long sentences flower again and again in a way that recalls Proust, and the spectre of Jorge Luis Borges hangs over everything. Finally we arrive, via innumerable twists and turns, at an account of the history of silk, and at something that Sebald, in the table of contents, calls ‘the extermination business’; a description of the process by which aged silkworms are boiled to death once their threads have been spun. It’s little wonder that Sebald so often invokes the image of the labyrinth, since the book in fact resembles a labyrinth, with its disorientating system of tangents, its collage of voices and temporal realities, and the implication of a mysterious, indeed transcendent, logic, just beyond reach.

Sebald was born in a small Bavarian village in 1944. His father was a German soldier during the invasion of Poland and although the family albums were later filled with photographs from the campaign – ‘a boy-scout atmosphere’ gradually giving way to photographs of Polish villages razed to the ground – both his parents refused to speak about what had taken place. This ‘conspiracy of silence’, as Sebald called it, dominated post-war German life, infecting its institutions and impelling him to leave for Britain in 1966, where he eventually became an academic, specializing in German literature.

This silence, which is to say, the unspeakable crime of the Holocaust, lies at the heart of all of Sebald’s work. It is constantly evoked (the enormous slaughter of silkworms or herring for instance), yet rarely approached directly. In this sense, memory is always a type of emergency and the job of writing takes on an ethical burden that is both personal and political. And yet it would be a shame to mischaracterise these works as singularly mournful. In Sebald’s writing the open secret is the Holocaust, and its almost unbearable weight of tragedy. The hidden secret however, is surrealism. In The Rings of Saturn, in particular, Sebald is always trying to fly away:

Under the wonderful influence of the painkillers coursing through me, I felt, in my iron-framed bed, like a balloonist floating weightless amidst the mountainous clouds towering on every side.

In middle age Sebald found himself in a dark wood, a labyrinth otherwise known as academia. He felt hemmed in on all sides, he said, by the responsibilities of his job. But a labyrinth is not only a trap; it is also a symbol of infinite possibility. On a train to London one day, while reading a book by the Austrian surrealist Konrad Bayer, Sebald realised that if he could simply change the nature of his writing ‘from academic monograph to something indefinable’ then he would have ‘complete liberty’. In doing so he invented an entirely new path for the novel, one that reintroduced the fantastical to realism, without resorting to the somewhat hackneyed tropes of magic realism.

Of Bayer, the artist and poet Gerhard Rühm once said: ‘His desires were limitless, he wanted to fly, to make himself invisible, he wanted to be able to do everything.’ The same might almost be said of Sebald. The final image in The Rings of Saturn evokes the heaviness of the invisible soul, as it flies reluctantly away from the body, ‘from the land now being lost forever’. Sebald died in a car crash in 2001.

Miles Allinson works as a bookseller at Readings St Kilda. 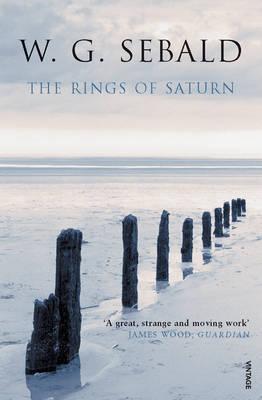 The Rings of Saturn