What I Loved: The Crying of Lot 49 by Thomas Pynchon

It’s the early 1960s and life is aglow on the American east coast. Amateur musicians are composing Beatles-inspired pop music, local shrinks are starting to prescribe medicinal LSD, and words like ‘feminism’ are sprouting in the minds of the young. Somewhere in this budding psychedelic mix is Oedipa Maas, a 28-year-old homemaker who has just been informed that her millionaire ex-lover is dead and that she has been named executrix over his will and assets.

Such an appointment is a momentous event for Oedipa. As the housewife of a used-car salesmen, she could do with a change from her current life of kitchen chores and Tupperware parties. Her lover was Californian real estate mogul Pierce Inverarity, a quirky, scattered fellow who has left behind enough obscure investments to make Oedipa paranoid about all sorts of wacky and dangerous underground movements.

Among these is the Trystero, a secret postal network with origins stemming from the once-thriving and very real Thurn and Taxis postal system of fifteenth-century Europe. As Oedipa finds herself chasing clues up and down the coast of California in an attempt to verify an increasingly difficult-to-believe reality – contending with various zany and often goofy male advances on the way – she begins to suspect she’s being strung along in one giant and fantastical conspiracy.

What I loved about The Crying of Lot 49 is Thomas Pynchon’s intricate and multidimensional portrayal of Oedipa’s marvellous ascent – or descent – towards revelation. As a first-time reader, you’re guaranteed to feel as confused and paranoid as Oedipa does about what is actually going on in this chaotic novelette. Pynchon seeks to deliberately synchronise the paranoid reader-experience with the paranoid character-experience in a way that is not all that dissimilar to that of Franz Kafka’s classic novel of nightmarish bureaucracy, The Trial. But unlike the bleakness in Kafka, Pynchon’s settings are full of sunshine, vaudeville and slapstick. You never go too long without someone busting out a kazoo, or tuning out to listen to just-discovered timbres in hallway muzak. This is the tale of a housewife-turned-sleuth, caught in a covert and madcap labyrinth.

Reading Pynchon is a kaleidoscopic leap into the most obscure corners of the past. His prose is so commanding that the most absurd historical anecdotes seem not only plausible but crucial to understanding the present – a literary comedy of the trippiest order.

Steve Bidwell-Brown is our Online Fulfilment Manager. He has previously worked as a literary events coordinator. 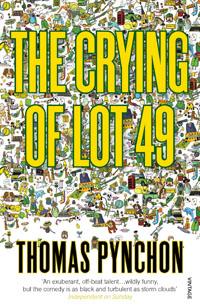