The Story of My Book: Machine Wars by Michael Pryor

Michael Pryor on the thinking behind his techno-thriller, Machine Wars, for readers of 10+.

Humanity has been fascinated by mechanical people ever since the whole idea of machines came about. You can call them robots or automatons or androids or cyborgs, all with their own variations and differences, but what they really are is a reflection of us. Robots are us but with something extra – strength, or endurance, or some other sense. We comfort ourselves, though, by insisting that robots are lacking some of the things we like to think make us special, that makes us human.

So even though we’re fascinated by these things, we have mixed feelings about them. They might be extremely useful in transforming society – and, indeed, robots are working away all over the world as we speak – but we are uneasy about them. The Frankenstein story explored the fear that what we create might not be happy with its creator.

I’ve always followed news about developments in robotics and artificial intelligence and I’ve read so many robot stories. I can remember the excitement I had when I first got my head around Asimov’s Three Laws of Robotics. I loved The Terminator (‘I’ll be back!’). I cheered on the Mars Rover as it bumped across an alien world. I’ve delved into the history of computing and the theories of creating a machine that can think for itself.

With all of this in my background, it was only a matter of time before I wrote a robot story. When I was beginning my planning, I knew I wanted to write something that was action-packed, something that would have readers on the edge of their seat, and the best way I thought of to do that was to have a first person narrative where the main character is being hunted, is in danger of being killed, and who is cut off from help.

Once I had that nailed down as a main element in the story, I needed characters who’d carry the story forward. Enter Bram, an ordinary enough teenager who has a not very ordinary family. When everything goes crazy, he has to run but I didn’t want him to be solo because it gets a bit boring when a solo character talks to himself all the time. So he gets tangled up with someone he knows from school and they have to run together. Stella was a fun character to write, someone who was a contrast to Bram. I knew she had to be a girl because I like seeing how friendships work when the people involved are from different sexes. And, besides, I don’t write books for boys. Or for girls, for that matter. I write books for readers.

After a number of drafts, I hit a problem. The story was good, but it wasn’t good enough. Something was missing. After lots of head scratching, I realised what it was – the story needed more robo-duck.

And that’s where Bob came in. 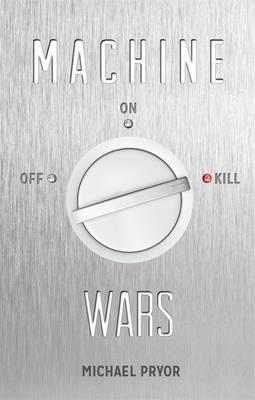