The Story of My Book: Lineup

Israeli writer and attorney Liad Shoham tells us how the women in his life helped him inspired him to write his latest novel, Lineup.

It started on a Friday, and just like many other times, it was because of the women in my family.

As on every Friday evening, we were having Shabbat dinner at my parents. Whenever we try to cancel, my mother always invents an event specifically on that day that requires a family get-together. That Friday she had a good excuse. My wife was in the last few days of her pregnancy with our second child. ‘Who knows when we’ll have the opportunity to enjoy a quiet evening meal again,’ my mother proclaimed already on the Thursday, before we could even contemplate of cancelling. We agreed. We didn’t say a word about the fact that she’d been using that very same excuse since my wife entered the fourth month.

Being a thriller author isn’t an easy matter; being both a thriller author and a geek is incredibly difficult. What would I know about the world of crime? Yes, I am a partner in a Tel Aviv law firm practising commercial law and litigation, and I’ve appeared numerous times before the Israeli Supreme Court. But I don’t always find juicy, interesting stories from my own world to inform my novels. So as usual, I begged my sister, who’s a defence attorney, to tell me an interesting story from her work, something that could give me the beginning of a story thread.

That same evening my sister told me about a case that was brought to the Tel Aviv District Court: a woman in her twenties was raped in her apartment. The police hadn’t found the rapist. The woman’s father had noticed a passer-by hanging around her apartment a few days after the rape, and managed to convince his daughter, and then the police and the State Attorney’s office, that it was the rapist. Just before the man was convicted, the real rapist raped again, and was caught. If not, the passer-by could have been convicted.

My family members heard the story and were amazed. ‘You have to write about it,’ my mother determined. I had my doubts. This is the problem with true stories: they aren’t credible. Readers would consider the story absurd if they read it in a novel. ‘Give me a different story,’ I asked my sister. ‘That’s all I’ve got,’ she said, and took a bite of chicken.

On the drive home, and while putting my daughter to bed, I couldn’t stop thinking about the story my sister had told me. I imagined the father sitting night after night in his car, afraid of what fate had handed his daughter, thinking the rape had been his fault because he hadn’t protected her, ready to be at her side within minutes if she called him. I thought of the physical and emotional toll on the father, on his relationship with his wife; of what the rape had done not only to the victim but to her family as well. How had he managed to carry the entire system away with him? How had he convinced everybody that that was the rapist? Where were the brakes and the balances?

The story of the passer-by too, who happened to be in the wrong place at the wrong time, and found himself charged with rape, wouldn’t leave my mind - had he, as sometimes happens, admitted to a crime he hadn’t committed? If so - why?

As I said previously, this was during the last few days of my wife’s pregnancy, and she was having trouble sleeping. ‘There’s an excellent series on TV that everybody’s talking about,’ she pulled me into the living room. That evening I watched the series The Wire for the first time. We watched one episode, then another, and then another. I think that what I liked more than anything was that the story was told from a number of different viewpoints. Until then all my books had had one main storyteller. The idea of telling the story from the viewpoints of the victim, the criminal, the cops, the attorneys, the judges, and by doing so providing a panoramic view of the legal system, attracted me. I knew that that was how I would write my next book.

‘The story my sister told today won’t leave my mind,’ I told my wife while brushing my teeth. There was no response from the bedroom. After watching four episodes in one go we were both exhausted, and I thought she’d fallen asleep.

‘I need to think of a good reason for the passer-by to be there, something I can begin the story with,’ I said, not sure if I was talking to myself or to her.

‘Maybe he’d hidden a bomb under one of the cars,’ I heard my wife say.

I froze. I started writing thrillers only after meeting my wife. When I first asked her advice about what to write about, I discovered that I’d married a ‘criminal mastermind’. This came as a surprise to me. When you invite a girl on a date, her ability to plan a murder isn’t something that simply comes up in conversation. I liked the idea of the hidden bomb.

‘That’s why he can’t tell the cops what he was doing there that night,’ I answered the bedroom enthusiastically. ‘Maybe admitting to rape was the less problematic choice for him.’

My wife gave me a look that told me that as usual, I was a few steps behind her.

I couldn’t fall asleep. I was excited and thrilled. That’s how it always is for me when a new idea for a book is born. I lay in bed and considered possible directions for the plot. I thought excitedly about the great deal of research work that awaited me, about the people I would meet, that I would consult with. Is 1:30AM too late to call my editor and tell her about the new idea?

I reminded my wife that when I was a child, a car exploded in our street because of a bomb. We were living in Paris. My father was working at the Israeli Embassy. Israel was at war with Lebanon and Israeli diplomats had become the targets of terrorist organizations. The man who had started the car was a friend of my father’s.

‘Liad, listen when I’m speaking to you,’ my wife cut into my thoughts.

My son was born a few days later. Eight months after that Lineup was published. 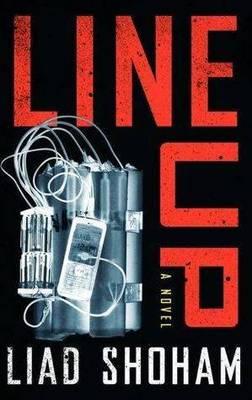