Charlotte Wood is the author of The Natural Way of Things. Here she tells us the story behind her novel.

The very first glimmer of the story came to me in an ABC Radio National documentary about the Hay Institution for Girls, a brutal prison in rural NSW, where ten teenage girls were drugged and taken from the Parramatta Girls’ Home in the 1960s. At this place, which operated in extreme cruelty until 1974, the girls were forced to march everywhere, were never allowed to look up from the floor or speak to each other, and endured all kinds of official punishments. But there were also many sadistic unofficial punishments inflicted on them. I knew I wanted to write about a place like this, but I needed to immediately to unshackle my story from the real place – for various reasons, including that many surviving women have written their own testimonies, and I didn’t want to appropriate their experience or anything like that.

But a more pressing problem emerged for me early on, which was that my work in these early bits of the book I was writing, set in the 1960s and 70s, was just dreadful. The writing was dead and sludgy and lifeless.

Around this time, when I was having this difficulty and trying to make the work live, I began noticing something. It was already in my mind that the reason many girls were sent to the Parramatta and Hay homes in the first place was that they had been sexually assaulted – at home, or wherever, and had told someone about it. It was this – speaking about what had happened to them – that got many of them sent there. They were deemed to be promiscuous and ‘in moral danger’. This seemed to me to be the cruellest thing, that their crime was that they had been abused, spoke the truth about it, and were punished for doing so.

So here I was writing this dead crap, and then I began noticing things in the news, things happening around me in the contemporary world, that showed these attitudes about speaking and punishment were not of the past. We had David Jones CEO Mark McInnes resigning after sexually harassing an employee, we had the army soldiers Daniel McDonald and Dylan Deblaquiere secretly filming a fellow cadet having sex and broadcasting it to their mates. In both these cases, the woman was vilified for speaking out. The army cadet became known as ‘the Skype slut’ by her peers, the DJ’s employee was labelled a gold-digger by hers. Around this time there were football group sex scandals where the women were reviled for speaking about it; we had women assaulted by the likes of Rolf Harris derided as liars and money-hungry, publicity hunting sluts. This stuff goes on all the time.

And I suddenly thought, “Oh, it’s not old, this stuff. These attitudes are not historical, they’re absolutely flourishing right now.” And then, partly out of this sudden bucket of cold water and partly because the book was not working – set in the past, written in naturalistic prose – I decided to do what I sometimes do when things aren’t working: try the opposite (the George Costanza method!). So instead of the past, I thought, what if I set it in the future? Instead of writing ordinary realism, what if it became a bit surreal in its narrative style? And I started writing about ten contemporary, urban Australian girls who find themselves abducted and dumped in this remote prison because they’ve been involved in some kind of sexual scandal with a powerful man or men, and they either spoke about it or were found out.

And at that point the writing just took off, a sudden energy really came into the work, and for the next year or two I got to know my girls and things in the story got more interesting, weirder, stranger, funnier and darker.

The power structures in place in my prison begin to crumble, and the girls start to enter into a dreamy kind of wildness – not only of the natural world, but in themselves. The wildness of their own bodies as they return to a ‘natural’ state rather than being controlled and primped and acceptable as they were in their normal urban lives, and the way the girls respond to this naturalness – some with horror, some with relief – is one of the reasons for the title.

I think for me, at its heart, the book is really about this wildness. The writer Malcolm Knox said that in writing this book I had, “gone a little bit feral”, and I thought that was the greatest compliment I could have received. I hope it is a feral book. I hope it doesn’t toe any lines. The book doesn’t represent anyone or follow anything but my own subconscious artistic instincts. And that made it both exciting and scary to write.

Charlotte Wood is our featured author for October. Find out more here. 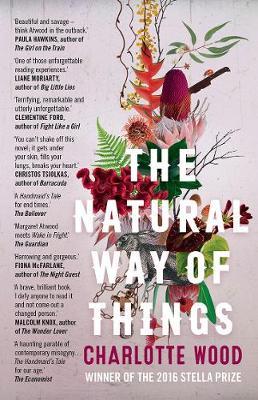