The story behind BOLD

David Hardy is the editor of BOLD: Stories from older lesbian, gay, bisexual, transgender and intersex people, a new anthology from Melbourne not-for-profit book publisher, The Rag and Bone Man Press. Here, Hardy tells us about the process of making the book, and why it matters.

BOLD is a collection of stories from more than 60 older lesbian, gay, bisexual, transgender and intersex (LGBTI) people. They are largely unknown stories outside their circle of family and friends, and all beautifully told and deeply personal.

It was a winter day in Hobart in 2013 that I chatted with Charlie Beale, artistic director of the New York Gay Men’s Chorus. He was in Tasmania for the Out and Loud Festival of LGBTI choruses and I was there with my Brisbane choir. Charlie’s a nice guy and he was telling me about the great support his Chorus extends to the New York community, including sing-alongs at the LGBTI senior citizens’ centre. His chorus numbers about 250 and has a support network in place for older singers and others in need of help, the Nightingale Brigade. This chance meeting got me wondering and when I was home in Queensland, I conceived a collection of stories of older people, some of whom I knew or knew about and others who were yet to find their way into BOLD.

My initial step was to secure a book deal, to offer the certainty of a publication to those willing to tell their story. Professor Lynette Russell from Monash Uni had earlier suggested I submit my short stories to Melbourne’s The Rag and Bone Man Press, which later led me to successfully pitching the idea of this book. They partnered me with associate editor, Elizabeth Whiley who widened the search through a call out, with Hannah Cartmel who expertly edited the stories and with Dan Bisley who created a masterwork of design by blending personal photos, images from the Australian Lesbian and Gay Archives and daring typography.

Most of the early submissions including the 13 stories I wrote from interviews came through tips from my friends and those of my sister Sandy and a commitment to diversity, including those by Indigenous and migrant writers. A visit with my choir to Ireland in mid 2014 provided the opportunity for my first two interviews, with additional impetus for this collection from two early supporters, former Senator Bob Brown and the Hon. Michael Kirby. For many decades, Mr Kirby has championed justice yet his personal story, as with many other prominent Australians, has been revealed in relatively recent times. BOLD comes at this moment of daybreak, when light begins to shine on the lives of LGBTI people. Generous in detail and warmth and humour, the storytellers in this collection write about first love, of struggle for acceptance, sometimes the search for a hidden identity. These are stories of resistance and activism, chronicling earlier and current times and how they helped transform their communities.

In shaping the book, I drew on the evocative words of Michael Kirby’s speech, ‘Courage’, which he delivered at the Sydney Gay Games in 2002. The four chapter headings are: Ours is the world of love; People of courage; The days of exclusion are numbered; and Nothing is impossible.

BOLD brings together poets and politicians, elders and the elderly, actors and academics, conductors and counsellors, singers and social workers, publicans and preachers, magistrates and migration agents, dancers and drag performers, and artists and anglers. The stories are predominantly local, from every State with many from regional and rural centres, including Townsville where I grew up. There are also a number of stories and images from New Zealand as well as the US, UK, Northern Ireland and Poland.

This new book, BOLD, is of its time, helping to build community through the power of storytelling. It is daybreak and soon the lives of ordinary and extraordinary LGBTI people will be in full sun.

BOLD is being launched in Melbourne this Friday 27 November at Bella Union. The launch is free and kicks off at 6pm. Please RSVP to press@ragandboneman.org. 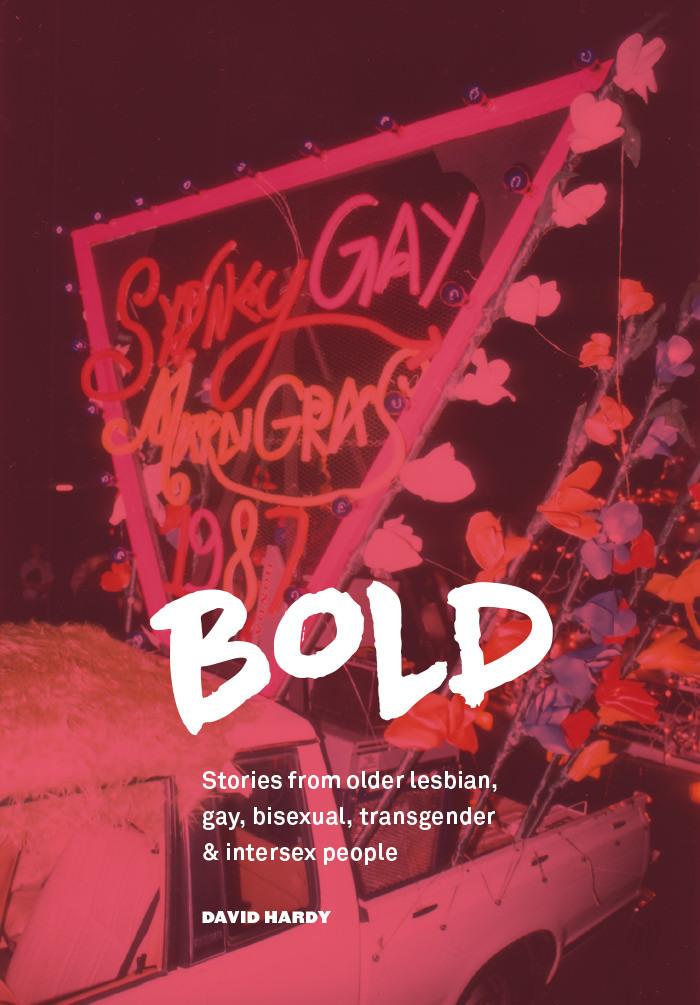