The Readings Teen Advisory Board reviews the new Garth Nix

This month we had a visit from book agent, YA advocate and forthcoming author, Danielle Binks, who was a whirlwind of energy and enthusiasm.

Danielle regaled us all with stories about the benefits of having an agent if you are an author, and what an agent does. It was absolutely fascinating, particularly when Danielle gave us specific stories about the journey to publication for some of her books, including Jenna Guilliame’s Readings YA Prize shortlisted title, What I Like about Me, Fiona Hardy’s middle fiction book How to Make a Movie in Twelve Days and The Little Inventor by Sher Rill Ng. She recommended the best way to find an agent to suit your writing is to look at the acknowledgements page of books that you love and see who the agent of the author is. Most authors will say wonderful things about their agent who got them their publishing deal. If they haven’t mentioned the agent in their acknowledgements then they mustn’t have liked them very much!

Danielle also gave us some insight into her middle fiction title coming out in June next year, which we are all very much looking forward to read, and what it felt like to be an agent pitching her own writing. In a word - nerve-wracking.

The whole team was very excited about Garth Nix’s new book Angel Mage and is our YA Book of the Month in October.

Read on for some of their fantastic reviews.

‘Thoughtfully detailed and exciting, with a feminist voice often missing from the fantasy genre.’ – Riley Rust

‘Fans of Holly Black and Leigh Bardugo will love this well-crafted world of angels as characters are forced to choose between love or awakening a terrifying power within themselves. Angel Mage is the kind of historical feminist fantasy novel I’ve been waiting for.’ – Chenuli Halgamuge

‘Mystery. Intrigue. Dashing Musketeers with swords. Sweeping cloaks and feathered hats. This book was all of my favourite things combined into one. Nix spun an intricate irresistible that left me breathless as I journeyed into the world of angelic summoning. Full of magic, camaraderie, adventure and bejewelled costumes, Angel Mage was one of the best fantasy book I’ve read this year.’ – Ananyaa Duggal

‘Garth Nix is known for his worldbuilding and with his latest novel, he does not disappoint. Angel Mage follows an original concept containing diverse, complex characters with a gripping plot, creating the ultimate fantasy package.’ – Claire Long

‘ Angel Mage is an exquisitely and meticulously designed world of monsters and magic, a world that is as beautiful as it is flawed.’ – Sasha Copic

‘Right from the get-go Angel Mage is jam-packed with action and full of vivid imagery, allowing you to envision the scenes right before your eyes – further fuelling whimsical thoughts of angels and mystical beings – whilst staying grounded to reality of course! Garth Nix does not disappoint. An afternoon of getting lost in the world of fantasy – what’s not to love?’ – Carolyn Zhang 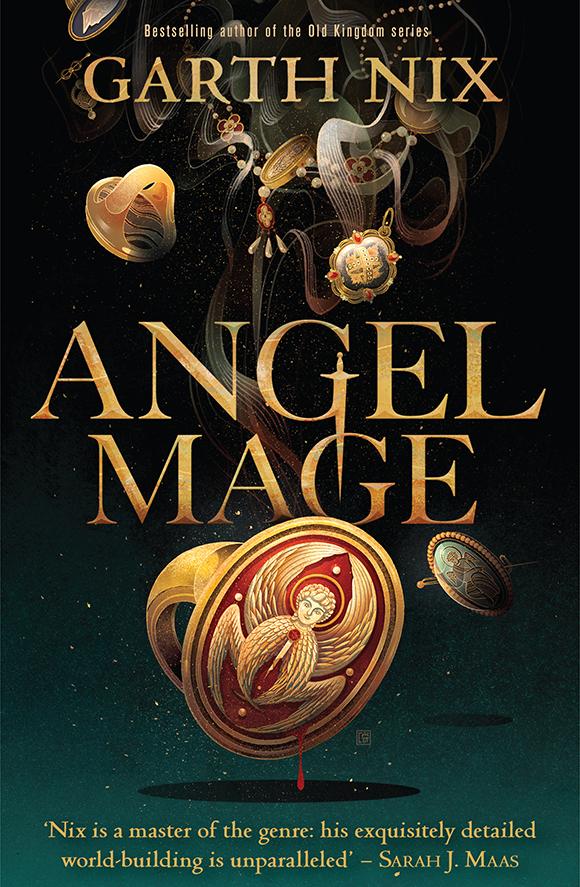