The best picture books have animals as doctors

The best sort of picture book is one that features animals being doctors, and I’ll brook no arguments about this.

An oldie but a goodie is Dr Dog (Babette Cole), which kids love, and which some parents find intolerable due the level of scatological attention.

The disgusting Gumboyles call on Dr Dog, a Bassett hound, when the entire family falls ill. Dr Dog hotfoots back from a medical conference in Brazil to correct the Gumboyles’ poor personal hygiene and diet. Gas, nits and worms are all discovered and cured! It is important to note that Dr Dog is satisfyingly well-equipped and attired, with a stethoscope, white coat and hat, and classic leather doctors bag.

Another nattily-dressed animal doctor is the slim and debonair mouse dentist, Doctor De Soto (William Steig), who has round spectacles and appears to be wearing the latest coloured skinny jeans (despite the book being written in the 80s).

Doctor De Soto has skill with the drill, and will treat any animal, except those that eat mice. When a fox comes to him with a terrible toothache, it’s soft-touch Mrs De Soto who convinces her husband to treat him. But when the fox gets all woozy on anaesthetic (it happens) and declares his wish to eat them, the De Sotos are forced to come up with a creative way of outfoxing the fox.

Species discrimination rears its ugly head again in Doctor Hoof (Diana Kimpton). Horse medic Doctor Hoof (round spectacles, bow tie, jaunty tail), moves to a new town and declares foolishly that he will only treat horses. When ailing donkeys, dogs and rabbits show up at his door, Doctor Hoof reluctantly treats them.

But when he finds that they are not so different from horses he changes his discriminatory policy (which, let’s face it, was based on fear and ignorance) and then every single animal possible attends a party at his house where every single sort of cake is served, and what appears to be breakdancing ensues.

My final example of animals being doctors is the lovely A Day with the Animal Doctors (Sharon Rentta) which is a fine and comforting book to give youngsters who have to spend time in a hospital.

The main animal in this instance is the exotic and little-known tapir. Lucky tapir Terence gets to go to work with his doctor mum at the Animal Hospital, which is a Very Busy Place. Terence gets to witness all manner of animals being fixed by doctors, from leopards to pythons. Rentta’s detailed illustrations show all the departments of the hospital, and lists some of the things that are found there.

Leanne Hall is a children’s bookseller at Readings Carlton, and a writer of young adult fiction. Her novel This Is Shyness won the Text Prize and her latest, The Queen of the Night, was released in 2012. She blogs at the longblinks.com and you can follow her on twitter - @lilymandarin. 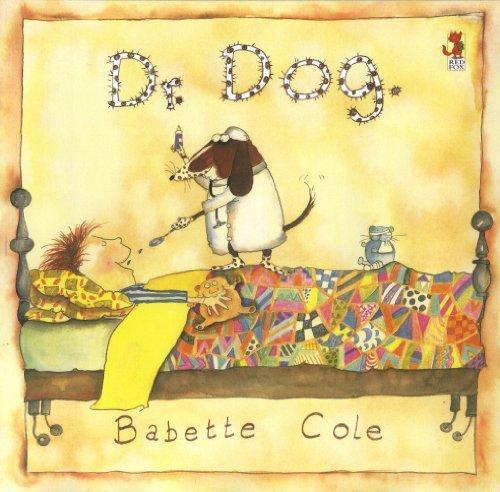