The Godmother by Hannelore Cayre

This striking little oddity comes with a hefty dose of French fame – it won the European Crime Fiction Prize, the Grand Prix de Littérature Policière, and has been made into a film starring one of the most perfectly French actresses around – Isabelle Huppert. Hannelore Cayre is a writer and a director, but most importantly, she is also a practising criminal lawyer who knows what it’s like on the law side of things – and, you’ll believe by the end, the unlawful side as well.

The Long Call by Ann Cleeves

From the author of so many successful books that two of her series have already been made into TV shows (Shetland and Vera, if you’re asking), now here’s a new series by Ann Cleeves to get into. Detective Matthew Venn lives by the water, and is recently back in the part of England where he grew up before being cut off from his family after leaving their religion. He and his husband are happy, until Venn is called to the scene of a murder on the same day as his estranged father’s funeral. The victim has a tattoo of an albatross on his neck: a symbol of his guilt. So, what in the dead man’s past has led to him being stabbed on the beach? And how can you detach from an investigation into a community that you’ve been part of before – and are about to join again? Cleeves is a master, seamlessly moving from one character to the next, and this is a brilliant police procedural for her fans old and new.

Bookseller Shaun Ryan – trapped in Ireland by his minimal resources, a secret relationship with a married man, and by the dog he half-loves and half-resents that once belonged to his mother – believes he knows everything he’d want to know about his family. On a visit to his mother’s grave, though, he encounters a long-lost friend of his Uncle Teddy, who died in a car accident years before. But this friend has news: Teddy didn’t die in a car accident – he fled to America. Shaun’s search for his missing uncle sees him tap into a web-sleuthing board, where people connect missing people to unidentified bodies. There’s a chance that Teddy was dead long before Shaun even knew he was gone, and those who investigated ‘The Boy in the Dress’ case online are desperate to chase up on Shaun’s lead. But who are these people online, and can they be trusted with information, or even with people’s lives? This modern crime story is a departure from Sarah Lotz’s horror tales, but features the ratcheting tension and character depth for which she’s beloved.

In the dead, cold hours of an English morning, a man enters Peterborough Station without being seen, and later throws himself in front of a freight train. It’s not the first death on platform seven: less than two years earlier, a woman had fallen to her death – but that wasn’t the end of her. She was there with the man as he sat waiting for the train. She was there when the station guards were confronted with the aftermath. She is always there: confined to the station, watching the people who watch the boards, never able to talk to the café workers, seeing the same people, and all the while unable to remember what happened to her. Until the death of this man sparks some memories inside her. A simmering, tense read by the bestselling Louise Doughty.

The Man Who Wouldn’t Die by A. B. Jewell

In Silicon Valley, everything seems possible and many things seem terrible. For William Fitzgerald (Fitch), a PI who does not particularly relate to the tech-soaked world he works in, everything is going fine-ish until a woman strides, Raymond Chandler-like, into his office and says she’s the daughter of Captain Don Donogue. The Captain Don, of the Valley. And he’s dead – possibly murdered – but it hasn’t stopped him from tweeting, apparently. In this world, the idea of online-life-after-death isn’t quite as farfetched as it seems, so Fitch needs to go deep into the underbelly of this ridiculous world to find out what really happened to Captain Don. A hardboiled, hard-laughter tale from an anonymous Valley insider that transports 1930s detective noir to twenty-first-century neon.

Three sisters in midnineteenth- century Yorkshire are living their quietly creative lives until they hear of terrible news from a friend: a young woman has vanished, leaving behind nothing but a pool of blood and a devastated family. These sisters – Charlotte, Emily and Anne – are clever enough to become lady detectives, and so the Brontë women, pre-publication, endeavour to find out what happened to the poor bride. However, in a time when those of a female persuasion are not expected to turn their interests towards such unpleasant things as criminal activities, it may be rather tricky to investigate – but nothing will stop them. Not even danger.

Wally Flannagan is heading to Indonesia for the blooming of a flower – something you can do when you’re retired from farming – and it’s going to be just wonderful. Of course, nobody in crime fiction ever gets to have a good holiday, and here Barry Heard – author of the bestselling Vietnam War memoir Well Done, Those Men – sees poor Wally kidnapped by a criminal syndicate with technological expertise, limited mercy and a lot of power. But what this savvy syndicate doesn’t know about Wally is that he’s got a past that they’ve missed – and that what he’s learned in years gone by may just save him from the future. A ripper of a thriller.

The Man That Got Away by Lynne Truss (Available 17 September)

If you require your British seaside crime to be quirky, Lynne Truss is back with a second Constable Twitten book for you. In Brighton in 1957, everybody is having a delightful summer until a young man with big dreams ends up dead in a deckchair – and that’s not going to be the only death for Constable Twitten and his colleagues to deal with. But can the three of them pull themselves together and solve the murder, or are there too many distractions? Not least a conman, a wax replica, and an infamous Brighton nightspot that Twitten suspects may have a connection to the death. This is a comic caper to die semi-gruesomely for.

How the Dead Speak by Val McDermid

This is the eleventh book in Val McDermid’s Tony Hill and Carol Jordan series, but it finds them in wildly different circumstances. Thanks to an earth-shattering case that changed everything for them, Carol has left the police force and Tony is in prison. While their team forms a new way of working without them, a new case just may inadvertently bring everybody back together again. The rebuilding of an orphanage sees the unearthing of dozens of skeletons from decades ago – along with several recent ones. One of them is a match for somebody apparently very much alive and with a connection to Carol, who’s working with people who have suffered miscarriages of justice. Meanwhile, Tony attempts to cope with the dread and fear of prison life by helping others and working on a project of his own, before the orphanage case throws him back with Carol – who he can barely bear to see. Another brilliant McDermid thriller.

Oof, it’s a dramatic title for a book when you consider that the author – the great Italian writer Andrea Camilleri – sadly passed away in July, aged 93. There are three more Inspector Montalbano books already published in Italian after this one, so with any luck this may not be the end of Montalbano for English readers either. In this twenty-fourth book, Montalbano and his team are working tirelessly to track the people smugglers behind the influx of migrants arriving in his town by boat, along with assisting the new arrivals in their journey – but the port isn’t the only place where there’s trouble. At home, Montalbano has been told to sharpen up with a new suit for an upcoming wedding, and so he finds a seamstress – but later the dressmaker is found, killed by her own scissors. And so Montalbano must try to fix everything in his typically irresistible way, and to his audience’s delight. 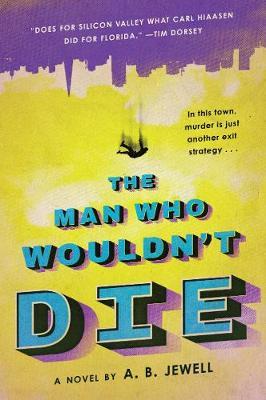