Tara June Winch has been named the winner of this year’s Miles Franklin Literary Award for The Yield.

Knowing that he will soon die, Albert ‘Poppy’ Gondiwindi takes pen to paper. His life has been spent on the banks of the Murrumby River at Prosperous House, on Massacre Plains, and he is now determined to pass on the language of his people and everything that was ever remembered. His granddaughter, August Gondiwindi, is on the other side of the world when she learns of his death. At her bittersweet homecoming, she learns that Prosperous is to be repossessed by a mining company. The Yield is the story of a people and a culture dispossessed, but it also a powerful reclaiming of Indigenous language, storytelling and identity.

Richard Neville, Mitchell Librarian of the State Library of NSW and head of the Award judging panel, says: ‘ In English ‘yield’ signifies what one takes from the land. In Wiradjuri it is ‘the things you give to, the movement, the space between things: baayanha. The Yield explores the legacies of colonial violence, shame, intergenerational trauma and environmental destruction. Winch celebrates and amplifies the contemporary resurgence and relevance of the Wiradjuri language. The Yield, a story of pain, loss, resilience and hope, is a novel where the past is the present is the future”.

Readings Head Book Buyer Alison Huber commented: “To read The Yield is to relish words, and to understand the centrality of Indigenous languages to culture. Using a multilayered narrative, Tara June Winch carefully excavates the story of a mission town and a family. This is a moving literary work about home, belonging, and the ongoing violence of colonisation, written in gorgeous prose by one of our rising stars.”

The Yield is the second novel and third work of fiction from Winch. Find all of her books here.

First awarded in 1957, the Miles Franklin Literary Award is presented annually to a novel of the highest literary merit and presents Australian life in any of its phases. As the 2020 winner, Winch will receive $60,000 in prize money. You can find out more about the award here. 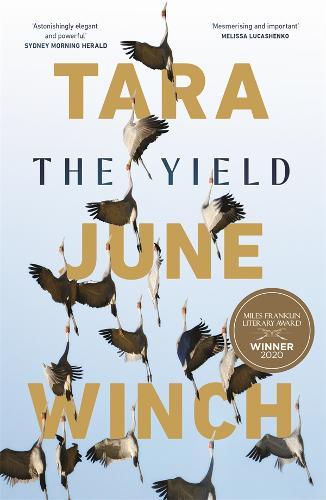