Written by the inimitable Maria Popova, the mind behind the website Brain Pickings, Figuring explores the complexities of love and the human search for truth and meaning through the interconnected lives of several historical figures across four centuries – beginning with the astronomer Johannes Kepler and ending with the marine biologist and author Rachel Carson. Stretching between these figures is a cast of artists, writers, and scientists – mostly women, mostly queer – whose public contribution and private motivations have changed the way we understand, experience and appreciate the universe.

A History of the Bible: The Book and Its Faiths by John Barton

One of the central books of Western culture, the Bible has altered the course of history, and yet it’s rare to see a history of the text itself, rather than traditions and other sources that surround the Judeo-Christian faith. Gorgeously designed and with more than 600 pages, A History of the Bible: The Book and Its Faiths is an ambitious study of the Bible’s creation: how it came to be written, how its contents were selected – and how it really relates to the religions that endorse it.

Robert Menzies: The Art of Politics by Troy Bramston

Robert Menzies claimed the prime ministership in 1939 and led the nation during the early years of the war, but resigned two years later after losing confidence in his party. His political career seemed over, and yet he staged a great comeback, forging a new political party and becoming Australia’s longest-serving prime minister. This is the first biography in twenty years of the Liberal politician, and it contains important contemporary lessons for those who want to understand the art and science of politics.

Greek to Me: Adventures of the Comma Queen by Mary Norris

Comma Queen Mary Norris, author of the delightful Between You & Me, returns with a buoyant book about language, love, and the wine-dark sea. In the same witty and irreverent tone readers loved from her first book, Norris delivers a paean to her lifelong love affair with words and all things Greek. Along the way, Norris explains how the alphabet originated in Greece, makes the case for Athena as a feminist icon, goes searching for the fabled Baths of Aphrodite, and reveals the surprising ways Greek helped form English.

An Unconventional Wife: The Life of Julia Sorell Arnold by Mary Hoban

Julia Sorell was an original. A colonial belle from Tasmania, vivacious and warm-hearted, Julia’s marriage to Tom Arnold in 1850 propelled her into one of the most renowned families in England and into a circle that included Lewis Carroll and George Eliot. Her eldest daughter became a bestselling novelist, while her grandchildren included the writer Aldous Huxley. Told with the pace, depth, and psychological richness of a great novel, An Unconventional Wife is a riveting biography that shines a shaft of light on a hidden but captivating life.

What Dementia Teaches Us About Love by Nicci Gerrard

‘Dementia is an unmaking, a de-creation - an apocalypse of meaning,’ writes British author Nicci Gerrard, who watched her father’s slow-motion dying, and his actual death in November 2014. Since then, she has been preoccupied with the stories of those who have dementia, by those who look after them, by the way society deals with it or denies it, by the science of it, and the art and literature about it. Structured around the stages of the disease, and filled with a sense of sadness and optimism, What Dementia Teaches Us About Love journeys into the dusk and then the darkness – and then out on to the other side. 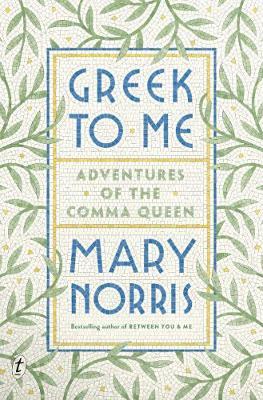 Greek to Me: Adventures of the Comma Queen