Joel Meares is the author of essay collection We’re All Going to Die (Especially Me). Here is a short extract from ‘I’m gay and have the scientific evidence to prove it (Or, the chapter Mum should not read)’.

I lost my virginity in my twenties, twice.

That’s not to say that I broke something ‘down there’ while riding a horse a few years before experiencing actual sex – as a proudly hymen-free male, that would be quite impossible. It’s to say that, like many sexually confused young gays, I tried it first with the ladies, before realising that the ‘as nature intended it’ route was not quite the route for me, and then tried it the other way.

I was slow on the uptake – it wasn’t until I was twenty-four that it dawned on me. You know how sometimes you’re at a movie and someone on-screen says something hilarious, and everyone laughs together and then, maybe a full minute later, someone else laughs all by himself, because they’ve just worked out the joke? That was me with being gay.

People did try to help me figure it out, in their own ways. In primary school, for instance, classmates would helpfully corner me in the playground to say, ‘You’re so gay.’ They didn’t know what they meant, but it was what you said to someone who spoke like a girl and ran like an flamingo and couldn’t catch a football the way you’re supposed to – ‘Scoop it, don’t swat at it!’ the teacher would yell whenever a ball sailed towards my splayed-out hands.

In high school I was intelligent, which is a synonym for gay at an all-boys Catholic school, so the slurs continued. In what was a pretty typical incident, an older boy I’ll call Tony (because that was his name) once berated me in the locker room at squash training, because I’d apparently tried to cop a look. ‘Don’t look at my cock, fag,’ he spat at me as he swung his uncovered crotch in my direction, like a newly engaged woman trying ‘not’ to show you her diamond. The next day his whole year knew about the time that fag Joel fixed his eyes on Tony’s junk, and they reminded me frequently in the school corridors and at the school bus stop that I had done so.

Much to my bafflement, people continued to helpfully tell me I was gay when I left school, too. While visiting a friend in Cobar, in western New South Wales, in my early twenties, I joined him at one of his co-worker’s mammoth, empty red-earth properties for what might be called a 24-hour heterosexuality test: cooking on an open fire, sleeping on shearers beds, building fences, riding motorcycles and, rather disturbingly, hunting kangaroos from the back of a ute late at night for no apparent purpose beyond the sport of it (I refrained from participating in the latter, but not from expressing my distaste for the activity).

Towards the end of the trip, as I lay on the ground trying to lift a motorbike off my leg, congratulating myself for having mounted the thing for a full three seconds – a personal record by … two seconds – my friend’s mate came to help me up. Pulling me to my feet, he asked, ‘Are you sure you’re not gay?’ reprising an uncomfortable line of fireside conversation from the night before, after which I thought the matter had been put to rest. I looked him in the eye and told him, again, ‘No, I just don’t understand how to change gears.’

When I tell people this now, they puzzle at why I never took the opportunity to declare my sexuality to the world when I had the chance, and throw from my shoulders the heavy weight of hiding myself that they assumed had amassed there. The thing was, I tell them, I genuinely thought I was straight.

Consider this for evidence of the depths of my cluelessness: during my second year as a journalist at the (Sydney) magazine, a PR worker for a major Sydney concert venue called and said she wanted to invite me to a show in their corporate box to thank me for all the support I had given them that year, by writing pithy one-liners about their shows in our monthly calendar. There were two choices for the show I could attend: Top Gear Live or Kylie Minogue’s KylieX2008 tour. I quickly chose the latter.

I often joke now that I knew I was gay the day I chose Kylie Minogue over Top Gear. But the truth was I didn’t. I just really liked her music – and I had done since I was six.

The first time I stopped for a second and considered whether I might actually be what everyone had been telling me I was came the morning after I’d gone to bed with a girl I’ll call Bec.

Even as people around me were questioning my sexuality – and probably gossiping about it – I was doing relatively well as a hetero. I’d had four or five what you would call ‘girlfriends’ – all, incidentally, after I’d lost about thirty kilos at age twenty-one – and slept with a few more women than that. None of those relationships survived my ‘three-month itch’, however: a suffocating feeling which hit me inexplicably at about the twelve-week mark and which, in retrospect, was yet another Minogue-sized billboard that I’d driven right by.

Bec, though, was special. Like most confused gay boys, there had always been special women in my life to add to my confusion – women for whom intense platonic affection was mistaken for romantic attraction and whose presence in your life leads to much pining and obsessing. It’s a ‘romantic’ affection rarely requited and wasn’t in Bec’s case: she could smell the gay a mile away and had asked once at brunch, point-blank, if I liked guys. I had laughed it off and quickly gotten back to my soy and quinoa toast.

We met while I was working in publishing, and I became close with her and her boyfriend of five years. When they broke up, however, I moved into the role of ‘comforting guy friend who really wants to bang you’ with pretty disturbing speed. One rainy night at her apartment, we ate soup and drank wine – and I listened (I listened very well) – and somehow ended up kissing our way to her bedroom. The twenty-odd dark and tumbly minutes that followed I recall only in flashes: a knocked lamp, a scratched back, a giggly, ‘I can hear the neighbours walking upstairs.’ But I remember clearly afterwards the deep but brief sense that it had been rather smashing and she’d been rather satisfied.

That was quickly followed by the empty feeling of a big mistake made as a question came from Bec, lying next to me in her bed, having barely broken a sweat: ‘Are you sure you’re not gay?’

I was reading Alan Hollinghurst’s The Line of Beauty at the time that Bec and I slept together, and opened it on the bus home from her flat that morning. It had fast become my favourite book, and I was savouring it, re-reading chapters for fear of moving on and getting through the thing too quickly. In the grey light of 5am, with Bec’s question ringing in my ears, I began to see why it appealed.

Hollinghurst’s book is the tale of a bright young guy from the country who goes to London, moves in with a friend from Oxford, the son of a Tory MP, and proceeds to have sex with random men in lavatories and famous rich men in lavatories and later in locker rooms – basically going around being what in my imagination was a standard 1980s gay. There is also a lot of interesting stuff about Margaret Thatcher and conservative politics and AIDS, and some beautiful, wrenching writing that I had long assumed were my big attractions to the book. But that morning I began to see what people were laughing at; the puzzle pieces started coming together: ‘What could be drawing me to this tale of this confused young gay man discovering himself in the big city?’ I wondered, realising the answer might be there in the question.

It wasn’t so much an epiphany as one of those Rubik’s cube whiz-kids coming along and, in a record-breaking nine seconds, solving the thing so that all the colours that had once been scattered about were now in their rightful place, and I could now see each side of myself clearly. And like a Rubik’s cube, that colour was rainbow. I began to understand that maybe I wasn’t just eyeing hot guys on the streets for styling ideas. And I now sort of understood why I had spent several hours that one day choosing just the right photo of a 22-year-old male ballet dancer for the profile I’d written on him. And why I had a three-month itch when in relationships with women. And why I always chose which porn videos to stream on the basis of how hot the men in them were, not the women. And why those sections of The Line of Beauty I kept rereading primarily concerned young protégé Nick Guest rolling around in bushes with dark men.

And why everyone kept asking me if I was gay.

It was because … I was gay, right?

To be honest, I still didn’t really know. I sort of felt I was, but how could one be positive about such things? People say you just know inside … it’s who you are. But I was also once a person who liked white chocolate – and, well, yuk. I might one day come to my senses on this gay thing too. As an empiricist, a practical thinker, and a complete neurotic, I needed proof beyond instinct – what if I announced I was gay only to later discover I’d merely been briefly TKO’d by Bradley Cooper’s epic jawline? Or simply moved by Hollinghurst’s Booker Prize–quality writing to an unusual degree?

The closet was not an easy place to re-enter. So I poked my toe out ever so slightly, just far enough that I could pull it back in if I needed to.

The first person I told out loud about this maybe new thing was Stephanie, my slightly older, significantly wiser friend and journalistic mentor. I’d told her I needed to talk, and we decided to do it over dosa near Sydney’s Central Station. I’d given her the ‘we need to talk’ text ahead of the chat, which was no doubt perplexing as we weren’t dating/married/ having any issues. Perhaps, I wonder in retrospect, she might have imagined I was going to confess some sort of crush … or murder. Who knows. But when we sat down, ordered and began dragging our stingingly hot pancakes through pots of curry and mushy lentils, she was quick to ask what was going on.

‘Why do you think that?’

‘Because I find boys sexy?’

She grinned. She seemed to half not-believe it and half always-have-known. She might have said wow, quietly, to herself, but I did not hear it.

‘Well how will you know if you really are or not?’ she asked, tearing off a shred of pancake and dunking it.

‘I guess I will have to experiment,’ I told her.

Then we came up with a plan to test the hypothesis.

Joel Meares is our featured author for April. Find out more here. 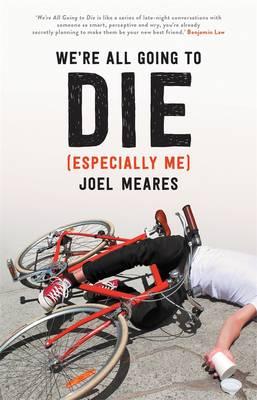 We’re All Going to Die (Especially Me)