Q&A with Serina Bird, author of The Joyful Frugalista

Serina Bird, author of The Joyful Frugalista, chats to events and programming manager Chris Gordon about her tips for ‘mindful frugality’ and the environmental benefits of being budget-conscious.

Serina, you are the godmother of the frugal movement. I know you say over and over again that saving money, or at least being mindful about money, is fun. Is it? Is making your own milo (impressive recipe by the by) really fun?

Marketing companies have spent billions of dollars trying to convince us that buying ‘stuff’ will make us happy. So it is understandable that when we think about leading a frugal, thrifty lifestyle it seems kind of dull in comparison to the bright, new, shiny ‘stuff’ that is for sale all around us. When I reflect on growing up around my Nana, I don’t really think the more tedious aspects of her frugal life were fun (for example, re-washing Glad Wrap or a general tendency of putting herself last). She often had little choice as she came from an era where giving up her job after marriage was expected, which meant she didn’t have her own income.

While going for ‘retail therapy’ might seem more fun than a more frugal alternative, I believe there is real joy to be had in tangibly creating things rather than buying them. I have a desk job during the day, and I often struggle to come away with a sense of clear achievement. Do-It-Yourself (DIY) at home is a good way to feel like I’ve created something real and measurable. There’s also some research that points to the value of craft in therapy. With mental health illnesses such as anxiety and depression being so common in Australia, a palpable connection to what we make can have a real and positive impact on our well-being.

Cooking from scratch is an example of this. I have always loved to cook. Cooking for others, especially my family, is an extension of the joy I feel for them. I’m a cook so, unlike a chef, I have to do my own dishes and yes, there is a limit to the joy when the dishes pile up! In addition to saving money, I know what is in the food make. Ingredients in many processed food products can be scary. Homemade is something money can never buy.

That hot chocolate mix is an occasional treat – especially for winter (it’s something I make when we go skiing). And yes, the family really likes it – especially the marshmallows!

The $50 a week on food challenge on your blog started a craze in Australia. You became an inspiration. Were your boys inspired? Do they share your enthusiasm? I know that my kids would find being frugal difficult, especially when it comes to their phones/laptops/electronics etc.

I have two boys (aged six and nine), and yes, they are very much of the tablet/gaming age. I would be lying if I said they were new-aged hipsters who enjoy going without technology for long stretches of time. Or if I said they didn’t like eating junk food.

However, if you don’t make a big deal of a reduced food budget, they don’t really notice. If you have always cooked a lot at home, to them that is normal. If you can manage to go shopping without little kids in tow, it is much easier. Many foods in the supermarket are deliberately marketed to kids – you can tell by the cute cartoons on them. If I do take my kids shopping with me, I usually tell them they can have one ‘unhealthy’ food item. They know exactly what is healthy and unhealthy, and when forced to choose, they will value the end choice.

My kids are (thankfully) too young for phones and laptops (yet!). They each have a Lenovo tablet that I bought for $97 (less actually, because I used a discounted gift card that I bought through the Entertainment Book). For Christmas, we bought them a second-hand Wii console and now we are collecting second-hand games. They still get distracted on their tablets, but at least this is a more active form of engagement.

My husband Neil bought a new laptop for himself around eight months ago. He bought a Kogan one, at a fraction of the cost of a branded one (from memory it cost around $450). He did a lot of research before he bought it and finds that it has the features that suit his needs.

We both use mobile phone plans that cost $99 a year from ALDI. Other products are cheaper but this has the coverage we need (we are often in rural areas in New South Wales). My phone is stuck together with sticky-tape after the screen fell off! I could replace it, but for now it works fine. It has a good camera so it still takes fabulous Instagram photos.

Every dollar counts now, especially when we consider the environment. Do you feel you are part of a political movement?

Yes, every dollar counts and everything we do matters. The issue of climate change often seems too big, too great, too scary and too real. It is difficult to know where to start. I am not aligned with any political movement. My personal belief is that every small change to our consumer behaviour benefits both our own lives and the environment.

A few years ago, my eldest son was doing an ACT government-run carbon challenge through his school to reduce carbon emissions. Every week we would calculate savings made from challenges. I was amazed at how many things we could tick off: Hang things out in the sun to dry rather than put in the dryer – tick! Don’t use disposable plastic in school lunchboxes – tick! Meatless Mondays – tick! Grow vegetables or plant seeds – tick! Setting our winter heating to below 20 degrees – tick!

That was my light bulb moment when I realised that not only was I a frugalista, but in my own way I am an environmental warrior as well.

What’s the best way to start being mindfully frugal?

More seriously, though, changes do take time. I think a good place to start is to record your expenses – no guilt, no judgement. You can download an app or you can use a notebook (or small diary). Do it for a week, and if you can manage that, extend it to a month. Then look at what you are spending money on and reflect if it aligns with your values and purpose. Were all those takeaway coffees and new shoes worth it?

Over time, you will find ways to reduce your spending. For instance, I used to go and buy expensive chai lattes mid-afternoon. I needed a bit of a sugar hit, and I was often feeling a bit tired and in need of a walk. Then I changed to buying yoghurt cups because they’re cheaper and healthier. Then one day, I realised I could save a fortune if I just bought yoghurt in the supermarket and took it to work! It was around a fifth of the price (perhaps even less) and I liked it even more. Then I thought about it a bit more and realised I could make my own yoghurt using an EasiYo maker. By making it with a little bit of the starter (and some sugar and vanilla flavouring), I could create the same thing for $1 a litre at home. I’ve been doing this for a decade now, and it’s saved hundreds of dollars. Also, that’s hundreds less little plastic cups in landfill.

And because we always ask this, what are you reading now?

Too many things! I love books. I have a huge pile on my floor beside my bed. One I’m currently reading is The Nude Nutritionist by Lyndi Cohen. I love the recipes, but more than that, I love her ‘be kind to yourself and give up perfectionism’ attitude.

The Joyful Frugalista is available now. 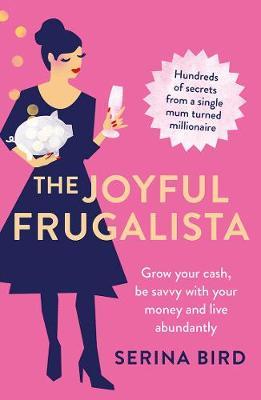