Q&A with Matthew Condon, author of The Toe Tag Quintet

In Toe Tag Quintet, a Sydney cop moves to the Gold Coast to retire and finds almost instantly that he would have experienced a more relaxing time had he stayed at work. Did you enjoy taking crime out of its typical home in Sydney and Melbourne and into sunny Queensland?

Did I enjoy it? Absolutely. The Gold Coast has in its own way emerged as one of the crime capitals of Australia – drugs, bikies, internet fraud. It’s a sort of kitsch amalgam of 1970s Kings Cross and Las Vegas, with a healthy dose of pastels and surf and sand thrown in. How could I resist? A friend of mine, a former Sydney detective, retired to the Gold Coast and told me that on his first day in his new home, walking the beach, he passed another elderly walker whom he recognised. It was a criminal he’d jailed in Sydney many years earlier. It got me thinking about how even criminals have to retire somewhere – so why not the sunny Gold Coast?

You have captured wonderfully the cranky tone of the garden variety retiree, grouchy at his entire environment while still entirely lovable. Was it liberating to write a character that vents about everything?

To have a character who, quite frankly, couldn’t care less about what people think of him and who never self-edits what comes out of his mouth was completely liberating. He seethes and fulminates and cracks bad jokes without thought of consequence. I have observed this in some people who reach a certain stage in life and think – what the hell? I’ve earned my right to say what I think. Why watch my p’s and q’s? I would love to be one of those people who are completely and utterly immune to embarrassment and the niceties of social mores. Perhaps I’ll become one, fingers crossed.

I love that our hero gets his son to look up information on the internet then mail him the hard copies. How do you think technology has changed the face of crime writing?

I am new to writing about crime though I have had a lifetime’s fascination with it. I’m currently completing a two-volume non-fiction work on crime and corruption in Queensland over the past half-century, and to compare the technological resources police have today to even thirty or forty years ago, well, it’s mind-boggling. It’s the difference between, say, the DNA analysis of a blood sample and the collating of a 3 by 5 inch index card system with handwritten notes as a way of cracking the case. I would imagine crime writers have to be as au fait with technology as those using it at the coal face of police investigations. As for my man in Toe Tag, he’s a dinosaur. He wears down the shoe leather and follows his nose.

In the past, you’ve written books like your expansive and much-loved novel The Trout Opera. Do you see yourself returning to crime fiction in the future?

I don’t see why not. While Toe Tag is – I hope – more a comic take on the crime genre, it was great fun throwing people out of buildings, firing weapons, sifting through evidence, following clues and playing around with some unsavoury characters.

Though not without the requisite dead bodies and serious crimes, the comedic nature of Toe Tag Quintet makes for an excellent read. Do your favourite crime writers tend towards the humorous or the noir?

Probably yes – the more serious the crime, the more scope for comedy. There can be a lot of fun to be had with death. I think back to that terrific crime epic, The Sopranos, which I see more as a great novel than just TV. Alongside the more appalling human atrocities committed by Tony Soprano and his gangsters sit hilarious moments that centre on domestic life and the many flaws that constitute being human. Pauly, for example, can murder a rival in the most horrendous way, then be concerned to the point of distraction about a blood spot on his white tracksuit. Great stuff. Life and death. The comedic possibilities are endless. 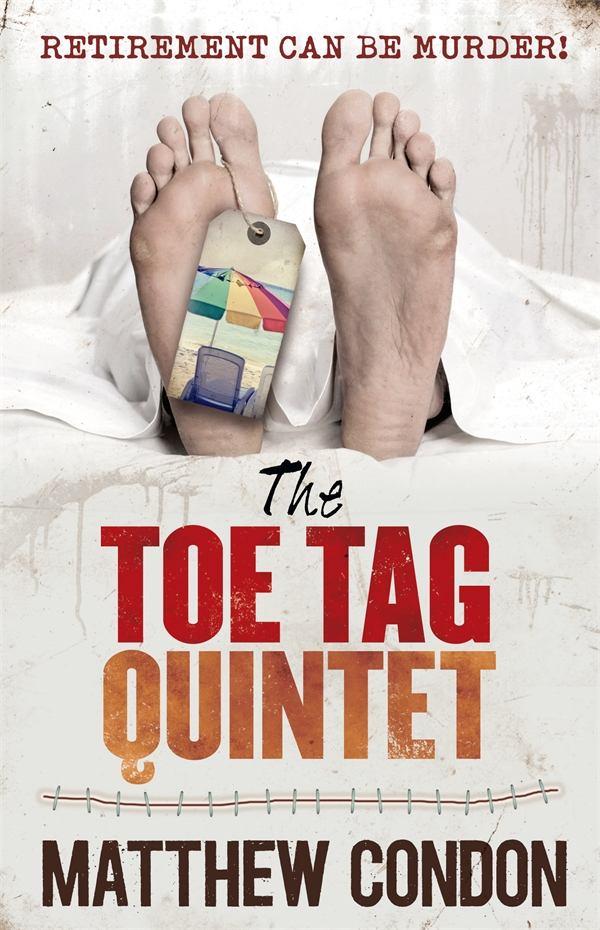