Although I didn’t grow up on a dairy I loved the cows and calves in Mr Greenwood’s paddocks next door. Growing up in the northern rivers district of NSW in the 1960s meant regularly seeing herds of cows assembling for the morning/evening milk. As imagined by Lainey, the girl hero of my novel, I too dreamt of living with my kitten in a wooden cream can shelter.

Of course this romantic vision of dairying is shattered by the reality of One Tree Farm’s dairy. Poor dairy country around Grafton looked lacking in crucial nourishment. But what I also found as a child was that that the roughest, most marginal farms, might also house people abrim with the milk of human kindness.

‘You are the light, let it shine/ You are the salt, don’t lose your saltness’ may well be the teaching I learnt more from old farming men and women of NSW, than from reading any edition of any bible.

Your previous books have all dealt with aspects of your own experience and you have made the comment that ‘I write from life, that’s where I always find my writing power. Does Foal’s Bread reflect this? If so how? If not, what has changed?

I think this book began long ago, when I wore a secondhand pair of whipcord jodhpurs so old-fashioned they still zipped at the side. From the age of say ten until 16, nothing was more important to me than riding, in particular, jumping a horse well. Using an old SLR camera that’d been through a flood but still worked, my sister Yvonne and I endlessly took photos of each other jumping horses over jumps rigged up using 44 gallon drums, tyres and bush poles.

It didn’t take much imagination to portray the Nancarrow family’s hopes and dreams connected to the show ring jumping and horses of an earlier era.

Everyone has experienced jealousy – its malevolent power to either the one feeling jealous, or the person on whom it’s bestowed. I see that the novel is very much an exploration of this most human of emotions.

Horses feature hugely in Foal’s Bread, as livelihoods, distraction from family life, as hope for the future. What is your first memory of a horse? What do they mean to you?

My first horse Flicka wasn’t what you’d call a suitable child’s pony. My father bought her from a local sale as a free-striding stock horse which really meant a crazy bolter who took the bit between her teeth and headed with me for the nearest line of traffic. Riding her was a thrilling terror. I quickly learnt the survival skill of leaping off before she picked up too much speed. As long as I kept hold of the reins she’d come to a dramatic sliding halt; then look innocently my way as if to say ‘what didya get off for?’

Long after growing up and leaving home, my dream of becoming a really good rider never abated. As I’ll always say, in the company of a charitable horse there’s nothing that you can’t learn deeply and intricately about yourself. The sorrow when I began to experience the first symptoms of multiple sclerosis, which slowly but inexorably halted my horse dreams in their tracks, eventually allowed me to describe the sorrow of Rowley Nancarrow.

Sixteen years between novels (if we exclude the 2002 collection of short stories, A Map of the Gardens), feels like a long time. Is each book different or have you always taken time to finish a book? Why did this book take so long?

Ruth Park, a writer I revere, wrote that creative energy could be like a volcano ready to blow its head off and that all novels have an optimum time of writing. For Foal’s Bread that time was 2009. So although it’s true that I’d been thinking about a book with this title since my earliest days as a writer, and assiduously accumulating images and fragments and dreams of what I thought a book with this title might be about, it wasn’t until two failed forays into other genres (a play, then a fable about a cat) that I realized Foal’s Bread’s time had arrived.

On 1 Jan 2009, I sketched a figure running and scrawled “On yer marks, get Set, Go. Go Gillian, Go.” I’d resolved to follow in the footsteps of Randolph Stow, another of my revered writers. I’d read in an old interview of how, fuelled by pork pies, he’d written his classic novel Tourmaline in a matter of weeks.

With excitement and dread, I began to piece together a complete first draft as fast as I could. Using chocolate and coffee rather than pork pies, by August I was like a thirsty horse galloping for the river.

However due to a sudden and unforeseen decline in my own health, it wouldn’t be until my 46th birthday the following year that I knew I’d produced something my agent would be willing to sell.

I grew up knowing a few unlucky horses that had had their tails chewed and sucked by the family goat. This always put a smile on your face as long as the goat had got nowhere near your own horse’s lovely tail. With a dare-devil rider such as Noey Nancarrow at the reins, definitely a goat can jump. Maybe though, she was exaggerating just a bit, saying she’d got one over 3’9”. 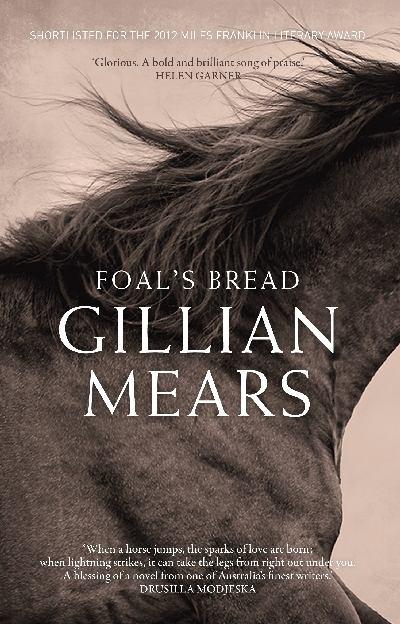