Patricia Lockwood has been announced as this year’s winner of the Dylan Thomas Prize for her novel, No One Is Talking About This.

The Swansea University Dylan Thomas Prize is awarded for the best published literary work in the English language, written by an author aged 39 or under. The Prize celebrates the international world of fiction in all its forms including poetry, novels, short stories and drama.

In No One Is Talking About This, a woman known for her viral social media posts travels the world speaking to her adoring fans, her entire existence overwhelmed by the internet - or what she terms ‘the portal’. Are we in hell? the people of the portal ask themselves. Are we all just going to keep doing this until we die?

Suddenly, two texts from her mother pierce the fray: ‘Something has gone wrong,’ and ‘How soon can you get here?’ As real life and its stakes collide with the increasing absurdity of the portal, the woman confronts a world that seems to contain both an abundance of proof that there is goodness, empathy and justice in the universe, and a deluge of evidence to the contrary.

Chair of Judges, Namita Gokhale, said: ‘ No One Is Talking About This is a vital reflection on online culture today. A deeply timely winner, Patricia Lockwood is the voice of a generation of new writers who grew up under the constant pressures of real-time news and social media.’

Our reviewer Tristen Brudy also said of the work: ‘I’m always going to be a Lockwood fangirl, but I admit her work isn’t for everyone. It may not suit those with more traditional tastes, but for those willing to brave it, No One Is Talking About This is richly rewarding – equal parts pathos and hilarity. More importantly, it’s an indication of where the novel is heading in the 21st century.’ 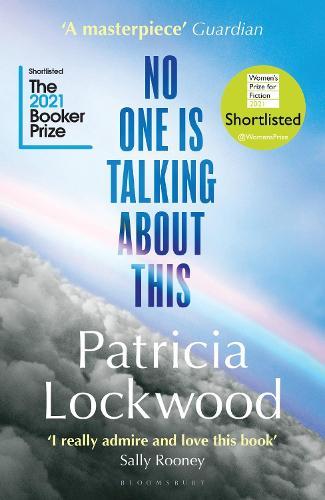