One of the joys of reading fantasy is being transported to other worlds that are breathtakingly different – and fascinatingly similar – to the our own regular human world. Here are some favourite books for children that take us to places strange and wonderful.

All these picks are suitable for ages 9 to 12.

The first book in Scarlett Thomas’s amazing Worldquake sequence, Dragon’s Green immediately establishes a setting that is equally strange and familiar. Effie, Max, Wolf, Lexy and Raven all attend the Tusitala School for the Gifted, Troubled and Strange, in a world that has undergone a cataclysmic event called the Worldquake. The quake took away modern technology, so the Realworld is effectively stuck in the Nineties, feels very English, and there’s magic too. But that’s not where it ends! There’s the Otherworld too, which can be entered through portals, if you have access. In Dragon’s Green Effie must enter the world of a rare and dangerous book, and survive a madcap scenario that involves a castle, a hungry dragon, and a horde of princesses.

The Republic of Birds by Jessica Miller

This Russian folktale-inspired fantasy is set in the kingdom of Tsaretsvo, a human nation that borders the rival Republic of Birds. After a professional failure by her father, Olga and her family are exiled from the capital Stolitsa and sent to the remote Imperial Centre for Avian Observation, close to the border of the Republic. When Olga’s sister Mira is kidnapped by the birds, cartography-obsessed Olga must venture into the Unmappable Blank and push the limits of her burgeoning magical powers. An icy northern world peopled with warm and odd characters, The Republic of Birds has a very appealing map of Tsaretsvo at the front – and who doesn’t love a good map?!

Orphans of the Tide Struan Murray

Orphan Ellie is a mechanic and lives in the last island City of a drowned world. When an enormous whale washes up on the edges of the City and disgorges a boy with no memories, the superstitious citizens reacts with suspicion -– he must be the Enemy, the god who drowned the world, who periodically returns to inhabit a human body. Ellie comes to the boy’s aid, but she also has her own very dangerous secrets to keep. The setting for this dark and atmospheric fantasy is palpable; the City is a great, towering, labyrinthine, Gothic pile (it reminds me a little of a scaled-up version of Mont-Saint-Michel), around which the tides rise and fall, exposing and hiding buildings. There is also another very satisfying map at the front of this book.

Twelve-year-old Herbert Lemon is employed as a Lost-and-Founder at the Grand Nautilus Hotel, which is located in the creepy, fishy, misty coast town of Eerie-on-Sea, the reputed home of the legendary fish-man creature, the Malamander. Normally Herbert is charged with finding objects, but when Violet Parma engages him to help her find her parents – who have been missing for 12 years – the two kids are dragged into a bizarre mystery that takes them all over town. Some of my favourite places in this funny and action-packed story is the Eerie Book Dispensary, a bookshop where a mechanical monkey decides what book you need, and the imperious Lady Kracken’s alarming home facilities, but honestly, every location in Eerie-On-Sea is equal parts mysterious and charming.

Morrigan Crow is a cursed child, unloved by her terrible family, and doomed to die on her eleventh birthday. So when she’s offered an escape route by the enigmatic Jupiter North, she has little reason to refuse. Morrigan is whisked off to the enchanting and odd city of Nevermoor to compete for membership of the Wundrous Society with Jupiter’s help. Nevermoor is filled with innumerable delightful things, like a giant talking cat, the magical Hotel Deucalion that morphs to suit the moods of its residents, and an umbrella-based form of public transport, the Brolly Rail. This is the first book in the Nevermoor series, and you’ll be pleased to know the streets and the byways of Nevermoor are expanded even further in book two, Wundersmith.

Ottilie Colter and the Narroway Hunt by Rhiannon Williams

When Ottilie’s younger brother Gully is taken by the Pickers, she disguises herself as a boy to rescue him. She finds herself at an elite training school for hunters, in the mysterious in-between world of the Narroway – a dangerous place that doesn’t appear on any maps and is overrun with terrifying creatures called dredretches. Not only does Ottilie face great peril, she also risks being found out to be a girl in this highly segregated world, where girls are confined to servant roles. The settings in Ottilie Colter and the Narroway Hunt are so vivid; from the soggy and impoverished cave community that Ottilie’s family live in, to the many details of the regimented boarding school environment. Running through it are murky hints at the larger problems and secrets that get explored in the second book, Ottilie Colter and the Master of Monsters. 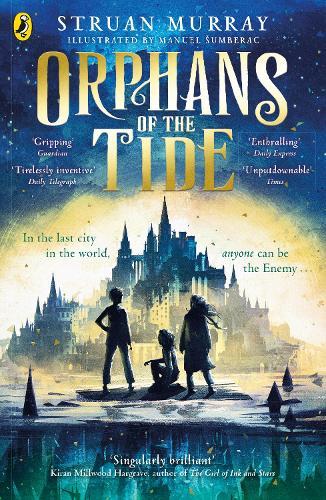 Orphans of the Tide

END_OF_DOCUMENT_TOKEN_TO_BE_REPLACED

The Threads of Magic