Blockbuster crime author Michael Robotham reflects on the razor-sharp and bitingly funny detective novels of Shane Maloney. The following piece was originally published as Robotham’s introduction to Maloney’s novel, The Brush-Off, which has just been re-released as part of the Text Classics series.

Let me introduce you to a friend of mine. He’s from Melbourne, but don’t hold that against him. And please don’t be offended by his politics or his cynicism about all those who seek elected office. His name is Murray Whelan and he’s a bit of a spiv, with the gift of the gab. He’s got a nose for trouble, which he steps in a lot.

Right now, for instance, Murray is carrying a bottle of filched chardonnay and playing hide-and-seek in the moonlit Botanic Gardens with the editor of an art magazine who is letting him nuzzle the pom-pom fringe on her mu-mu (none of which is a euphemism). Murray would give his kingdom for a condom, but that might not be enough, because not far away, across the Queen Victoria Gardens and the broad boulevard that is St Kilda Road, a body is being pulled from the ornamental moat at the National Gallery of Victoria. The victim, a struggling artist, is the magazine editor’s boyfriend and Murray will soon need an alibi more than a rubber.

In the morning, he will wake up with ‘twenty litres of used booze’ backed up in his southern suburbs, and a tongue that feels as though sea monkeys have hatched, spawned, died and shed their exoskeletons down his throat. While outside, a guy across the roadwill be hammering up a For Sale sign, advertising a single-storey, single-fronted terrace as ‘ A Gem from the Past. An Investment for the Future. No room to swing a cat, in other words.’

This is the delicious opening to The Brush-Off, one of the finest comic novels written in Australia in the past fifty years. A satire on politics, art and big money, it was penned by the ridiculously gifted Shane Maloney, a man whose talent for writing is surely only matched by his ability to procrastinate – otherwise we’d have a dozen more novels like this one to enjoy.

I’m being churlish in a glass-half-empty sort of way, when I should celebrate that there are six Murray Whelan stories, each of them dangerously distracting when read in public. I don’t normally laugh out loud on the L90 bus, or snort cappuccino foam out my nose.

First published in 1996, The Brush-Off is the second in the series, but they don’t have to read in order because each uses a murder to shine a light on the murky world of Australian politics (especially the Labor Party and the union movement). These are not crime novels as such, nor are they capers or farces or pure political satires, but there are elements of each. And at the centre is Murray Whelan, the ultimate political hack, minder, fixer, yes-man, dispenser of oil on troubled waters, spreader of largesse with a butter knife and the organ grinder’s monkey. The organ grinder in this case is Murray’s boss, Angelo Agnelli, recently appointed the state Minister for Water Supply and the Arts. The very thought of this makes Murray’s mouth go dry again. What did he know about Art – or water?

The Labor government is hanging by a thread, having snatched victory from the jaws of defeat at the previous year’s election. Short on funds and riven with internal strife, the last thing it needs is a scandal involving a dead artist in the National Gallery moat. Murray is called upon to fix the situation, but stumbles from one disaster/revelation to the next, uncovering political intrigue, corruption, forgery and sexual possibilities along the way.

Murray Whelan is a uniquely Australian creation, as well as being uniquely Melbourne. He alone among the swarming, pulsating mass of four million real-estate-maddened, midnight-tanned, sun-deprived, tribal AFL fans, wrapped in club colours and fuelled by Carlton Draught, decent coffee and Greek food, can make me fall in love with a city where I once almost froze to death at a Boxing Day Test Match and six weeks later witnessed Victoria almost burn to the ground in the Ash Wednesday bushfires, when temperatures hit 43° Celsius.

Talking of climate – has anyone penned a better description of the city’s weather than this:

Melbourne’s weather teeters forever on the brink of imminence. If it is warm, a cool change is expected. A day of rain bisects a month of shine. Spring vanishes for weeks on end. Summer arrives unseasonably early, inexplicably late, not at all. Winter is wet but not cold, cold but not wet.

Whether describing the airless bungalows of Northcote, or the tight-packed terraces of Collingwood, or the boulevards of canopied elms in a city with ‘Parisian fantasies’, nobody captures the southern capital better than Shane Maloney. He has written a love letter to Melbourne – its weather, culture, people and politics. Visitors could use The Brush-Off as a tour guide, discovering Fitzroy Gardens, Kings Domain and Southbank, as well as the inner-city lanes and the glass-walled towers.

Anything more than twenty years old was obsolete. Yesterday’s skyscrapers were today’s holes in the ground. Tomorrow’s landmarks had lakes in their foyers and computer-monitored pollen filters and the city council was putting little lights in the trees so we’d think it was Christmas all year round.

But even if you don’t read this book for the crime, or the politics, or the vivid sense of place, read it for the hilarious turn of phrase and razor-sharp descriptions that conjure up characters in a dozen words and puncture pomposity in half that many. A secretary has a ‘hair-do like a haystack and a lot more va-va-voom than she could burn off working as a typist at her fascist father’s rag’. A woman of ‘export-quality glamour’ is so far out of Murray’s price range ‘she might as well have been the Hope diamond.’ And a rusting art installation is ‘from the Turd of a Dog with a Square Arsehole school of sculpture’. I could go on, but why spoil your fun.

It’s not an easy thing to be consistently funny in print. Or to create a protagonist who has the necessary qualities of intellect, self-effacement and an eye for the absurd to hold up a mirror to our politicians, police, media, unions and corporate titans, showing them what they look like without any clothes.

Murray Whelan may never be adequately rewarded by his bosses for being beaten, throttled, set-up, stalked and occasionally laid; but readers appreciate what he endures. The same is true of his creator, Shane Maloney, who has a rare gift, one shared by the likes of Evelyn Waugh, Helen Fielding, Sue Townsend, Kingsley Amis, Jonathan Coe, Carl Hiaasen and Christopher Brookmyre. He can make people laugh as well as make them think, and have them punching the air when rightness prevails.

There is no higher praise.

The Text Classics series is designed to unearth some of the lost marvels of Australian literature. Maloney’s novel sits alongside works from luminaries such as Elizabeth Harrower, Madeleine St John, Helen Garner, Gerald Murnane and J.M. Coetzee, all available for only $12.95 each. 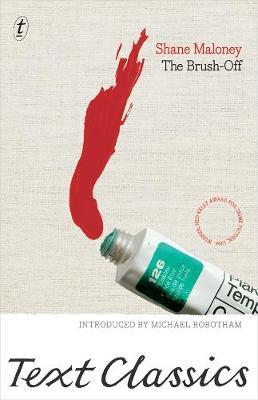