The theme for NAIDOC Week 2019 is ‘Voice. Treaty. Truth’ – the three key elements set out in the Uluru Statement from the Heart.

In honour of this, and also of the United Nations International Year of Indigenous Languages, we recommend six children’s books that contain Indigenous words and languages, and give voice to the rich lore, culture and knowledge of our First Nations Australians.

Molly the piglet is very lost and very little when she is discovered alone in the bush and adopted by a family. At first the local dogs pick on Molly, but when she discovers a love of Weetbix, something marvellous happens. Molly grows and grows and grows, until she’s bigger than the dogs that used to chase her.

Author Karen Manbullo lives in Binjari, a small Aboriginal community about 20 kilometres west of Katherine in the Northern Territory, and has based this story on real life (her brother really did find a pig in the bush). The words are printed side-by-side in Kriol (spoken widely across northern Australia) and English, and Molly’s escapades have been illustrated by the prolific Binjari Buk Mob, 24 women from the Binjari community who have collaborated on many Kriol-English books. For ages 1 and up.

This gorgeous picture book details a traditional baby smoking ceremony, attended by women and children, that welcomes a new baby to country. Using simple and perfectly pitched language, the many layers of meaning and purpose to the ceremony are explored: healing, protection, ancestral connection, law-learning and connection to country. The text is gently peppered with Darug words, and there is a short glossary provided.

Author and illustrator Jasmine Seymour is a Darug woman and a descendant of Maria Lock, daughter of Yarramundi, the Boorooberongal elder who met Governor Phillip on the banks of the Hawkesbury in 1791. Baby Business is a generous exposition of a really beautiful ritual for a newborn, and it would make the perfect present for new parents. For ages 2 and up.

Wilam means home in Woiwurrung, the language of the Wurundjeri people, and this stunning story depicts the many creatures who call Birrarung (the Yarra River) home, as it slowly winds from the mountains to the bay. Indigenous creators Aunty Joy Murphy and Lisa Kennedy (who also collaborated on Welcome to Country) have joined forces with Yarra River keeper Andrew Kelly to create a stunning picture book that explores wildlife, Woiwurrung language, history and the importance of the river to animals and humans.

It is written with Woiwurrung words integrated into the English text and features a readily accessible glossary. For ages 4 and up.

This colourful and practical bilingual songbook allows any reader to sing in Walmajarri and English, to familiar folk tunes like ‘Michael Finegan’ and ‘She’ll Be Coming Round the Mountain’. The songs were composed over decades by Jesse Wamarla Moora and other teachers at the Yakanarra Community School and surrounding schools, so that the students could speak Walmajarri.

The songs deliver a real slice of life in the Yakanarra community, which is located on the edge of the Great Sandy Desert in the South Kimberly of Western Australia. Gathering bushfoods, hunting, cooking, visiting waterholes, rocks and rivers, and stories about local animals, birds and fish, are all detailed in song form. The vibrant student illustrations were completed with the help of Australian picture book legend Alison Lester. For ages 4 and up.

A brave young man encounters a whale (mamang) and jumps into its blowhole, embarking on a strange journey inside the enormous animal. Singing and compelling the whale onward, the man eventually lands on new land, far far away from his home. He is greeted and celebrated by the local people, becoming part of their life, before eventually travelling back to his home country with his family. Told in old Noongar, contemporary Noongar and English, with gorgeous painterly illustrations, the text is laid out in a way that allows easy comparison of vocabulary and grammar. For ages 5 and up.

This picture book is part of the Wirlomin Noongar Language and Stories Project, which re-tells and reclaims old creation stories originally imparted to the American linguist Gerhardt Laves in 1931, through community and family consultation and participation.

Mia, a 13-year-old Jaru girl, cares for a dirrarn (black cockatoo) injured by her older brother Jy. As the cockatoo – which is also her totem animal – slowly regains its strength, Mia’s confidence also grows. Mia is a sensitive girl, immersed happily in her extended family and her culture, but she also worries about her older brother Jy’s life choices and is apprehensive about leaving her home to continue her education.

Written by husband-and-wife team Carl Merrison (a Jaru and Kija man from Halls Creek, WA) and Hakea Hustler, this is a simple but layered story illustrated beautifully by artist Dub Leffler. Jaru and Kriol words are used regularly in the text and there is a glossary provided. For ages 10 and up. 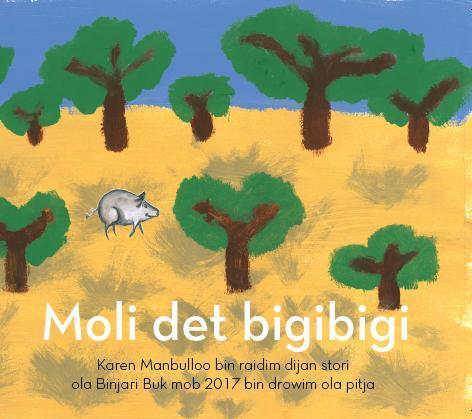 END_OF_DOCUMENT_TOKEN_TO_BE_REPLACED

What do you call a baby…?