In praise of trying

Poppy Nwosu is one of six authors shortlisted for the 2019 Readings Young Adult Book Prize for her teen romance and coming-of-age novel Making Friends with Alice Dyson. In this guest post, she shares her insights on trying new things, both in life and in young adult fiction.

In a world where irony rules, the bravery of trying new things should be celebrated – regardless of how things work out

As a writer of young adult novels, I’m always on the hunt for different ways to view the world I live in: alternate viewpoints and unique ideas I can weave into my fictional stories. I’m also passionate about travelling, which is another wonderful way to collect new ideas. Many of my favourite stories come from overseas. And one of the best things about experiencing other cultures is that it often turns a new eye on my own.

While working on my debut novel, I was particularly inspired by the shoujo anime I was watching at the time; a type of Japanese youth animation with strong coming-of-age themes. Within these stories, I began to identify a recurring theme that I was particularly drawn to: specifically the idea that when we are young, each small victory is worth celebrating.

This includes the smallest and most mundane of everyday acts, like speaking to someone new when you feel shy, volunteering to try something that frightens you, or simply just attempting to open yourself up to make a new friend.

An example that comes to mind is the shoujo anime, Ao Haru Ride (originally written as a manga and then adapted for television). It features a heroine who struggles with her view of herself while navigating new friends and an old love in high school. In stories like these, even having a crush on someone – no matter how unrequited it is or how terribly it ends – is framed as a good and worthy thing. In fact, experiencing anything for the first time, even if it doesn’t go well, is shown as positive.

Often emotional, hilarious and sometimes quite weird, these shoujo anime stories taught me that there is bravery even in the smallest and most awkward of moments. I was moved by this sensitive celebration of small victories and minute brave acts – a theme I really wanted to weave into my own work for young adults.

It also got me thinking: I wish that we in Australia had that culture of encouraging young people to celebrate the small things they achieve. (And not only teens, but all of us, no matter our age.) The idea that every experience where you try is worth feeling proud of: no matter whether or not it worked out, no matter how terribly the attempt might have ended. The idea that exploring your emotions and fears and putting yourself out there in a vulnerable and raw way can be a good thing – is a good thing – and is something to be proud of.

In my debut YA novel, Making Friends with Alice Dyson, I wanted to translate this theme into my fiction, and though my characters don’t always get everything right, I wanted to celebrate their act of trying. Two specific examples come to mind; the first is when my protagonist, Alice, who is frightened of opening herself up to love, realises that her best friend is brave for hurtling headfirst into an unrequited crush. The outcome doesn’t necessarily matter: she recognises that the fact her best friend was honest with herself about her feelings and never held back from them was a small act of bravery.

Another instance is when Alice decides she won’t allow herself to feel embarrassed by the things she likes. All of us have different passions, and it is an important act of bravery to admit that you love something that others around you might find strange.

In a lot of ways, I think the theme I wanted to explore in my debut was the act of knowing yourself, and of accepting yourself without ever holding back. I hoped my book would celebrate small acts of bravery.

Over time, I’ve even applied this idea to my own life. I’ve worked hard to celebrate my own small victories, my own small acts of bravery. Sometimes that could be as small as introducing myself to someone new at a networking event (something I’ve always been nervous about), or it could be submitting my creative writing for the first time and putting myself in the vulnerable position of being rejected (time and again) on my long and complicated journey to publication. I am glad I had those experiences, and I am proud of myself for trying, even when things didn’t turn out the way I’d hoped.

I really believe that each of these small, brave acts accumulates. They contribute to the way we see ourselves and the world. Ultimately, they form the tapestry of who we become.

Poppy Nwosu is the author of Making Friends with Alice Dyson, published by Wakefield Press. It is her first novel. 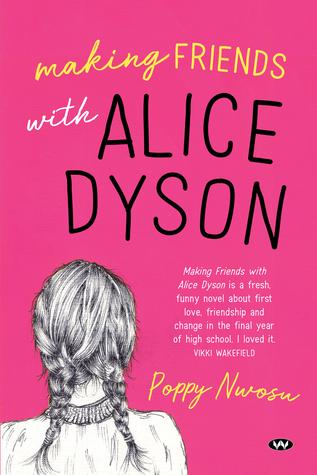