Five Graphic Novels We Loved in 2013

Here are five of our favourite graphic novels published over the past year.

This two-volume box-set collects the six woodcut novels, each composed of a single image per page, created by Lynd Ward in the 1920s and 30s. In his entertaining and perceptive introduction, Art Spiegelman attests that Ward ‘is one of only a handful of artists anywhere who ever made a “graphic novel” until the day before yesterday'.

Ward’s work is dense with the stark symbolism of an expressionist and is predominantly concerned with the nature of art on one hand, and the prevailing social and labour issues of the day on the other.

Co-Mix: A Retrospective of Comics, Graphics, and Scraps by Art Spiegelman

In an art career that now spans six decades, Art Spiegelman has been a groundbreaking and influential figure with a global impact. His Pulitzer Prize-winning holocaust memoir Maus established the graphic novel as a legitimate form and inspired countless cartoonists while his shorter works have enormously expanded the expressive range of comics. Co-Mix: A Retrospective of Comics, Graphics, and Scraps is a comprehensive career overview of the output of this legendary cartoonist, showing for the first time the full range of a half-century of relentless experimentation.

Starting from Spiegelman’s earliest self-published comics and lavishly reproducing graphics from a host of publications both obscure and famous, Co-Mix provides a guided tour of an artist who has continually reinvented not just comics but also made a mark in book and magazine design, bubble gum cards, lithography, modern dance, and most recently stained glass. By showing all facets of Spiegelman’s career, the book demonstrates how he has persistently cross-pollinated the worlds of comics, commercial design, and fine arts.

The Great War by Joe Sacco

Launched on July 1, 1916, the Battle of the Somme has come to epitomize the madness of the First World War. Almost 20,000 British soldiers were killed and another 40,000 were wounded that first day, and there were more than one million casualties by the time the offensive halted a few months later.

In The Great War, acclaimed cartoonist Joe Sacco depicts the events of that day in an extraordinary, 24-foot-long wordless panorama: from the riding exercises of General Douglas Haig to the massive artillery positions and marshalling areas behind the trench lines, to the legions of British soldiers going ‘over the top’ and being cut down in No-Man’s-Land, to the tens of thousands of wounded soldiers retreating and the dead being buried en masse.

Printed on fine accordion-fold paper and packaged in a deluxe hardcover slipcase with a 16-page accompanying booklet, The Great War is a landmark work in Sacco’s illustrious career, and makes visceral one of the bloodiest days in history.

In his first book with Faber, Hernandez tells the untold stories of these American comics legends' youth, and portrays the reality of life in a large family in suburban 1960s California. Told largely from the point of view of middle child Huey - who stages Captain America plays and treasures his older brother’s comic book collection almost as much as his approval - Marble Season deftly follows these boys as they navigate their cultural and neighborhood norms.

Set against the golden age of the American dream and the silver age of comics, and awash with pop-culture references - TV shows, comic books, super-heroes and music - Marble Season subtly details how their innocent, joyfully creative play changes as they grow older and encounter name-calling, abusive bullies, and the value judgments of others.

A coming-of-age story both comic and moving, it will have timeless resonance for children and adults alike.

The Long Weekend is a graphic novel that has been adapted from an essay that explores the idea of the Cultural Complex; one of Carl Jung’s early ideas about group behaviour that was left largely unexplored until very recently in the academic world.

Craig San Roque, the author the original essay, acts as narrator and protagonist. He takes the reader throughout a long series of poetic thoughts, places and over the course of a long weekend in the central Australian desert town of Alice Springs whilst he grapples with an analysis of his own culture and the pain which it intentionally and unintentionally inflicts upon other cultures.

Moving, challenging and dangerous, The Long Weekend is a haunting comic, both shockingly funny and supremely uncomfortable to read. It’s images will linger with you after you’ve placed it upon your bedside table, turned off the lamp and settled into a restless sleep. 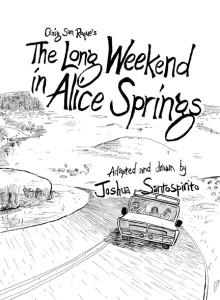 The Long Weekend In Alice Springs