Michelle Dicinoski talks to Benjamin Law about revolution and love, our hidden queer histories and her debut memoir Ghost Wife.

Cast your mind back to the last decade, and you might be forgiven for thinking same-sex marriage was going to be legalised in Australia at any moment. For the first time in history, the majority of polled Australians supported the idea. Around the world, countries made history by passing it into law. First came the Netherlands in 2001, then Belgium, Spain, South Africa, Norway and some American states. Shortly after Canada legalised same-sex marriage, Australian writer Michelle Dicinoski and her girlfriend (now wife), Heather, flew over to get hitched – the story of which has become Dicinoski’s debut memoir, Ghost Wife.

‘I kept thinking I’d have to write this book relatively quickly,’ she says now, ‘because the law would change [in Australia].’ She laughs thinking about it. ‘Ridiculous, in retrospect.’

Ghost Wife is a pioneering book on several levels. As far as I can tell, it’s the first published Australian memoir about same-sex marriage. It’s also released at a weird juncture in time where Australians can get married overseas, then travel back to an odd mirror existence where no one legally recognises it at home.

‘I always wanted to make some document that would last,’ Dicinoski says, ‘because I knew the wedding, in some ways, wouldn’t. There was the question around the legality of it, and the fact it would be this “ghost marriage” in Australia. So I wanted to give it an embodiment in another way. If it couldn’t have it through legal standing, I’d try to make a book.’

The book is revelatory in other ways too. While Ghost Wife centres on the story of Michelle and Heather’s marriage in Canada, Dicinoski also weaves in the history of same-sex couples from decades – sometimes centuries – ago. There is Lilian Cooper and Josephine Bedford, who board a ship in 1891 from London to Brisbane to carve out a new life together, and are now buried side-by-side in Toowong Cemetery. There’s Bill Edwards, the Victorian man who moved to Brisbane to take a wife, only to have the police discover him to be a woman in 1905, igniting a media frenzy. And there’s Ivy and Jerry, the interracial lesbian couple who staged a wedding in Toronto in 1957, only to have the ceremony written in the local gossip rag as a scandalous freakshow.

‘During the research, I found these other stories of these people who really were pioneers,’ Dicinoski says. ‘Some of them I knew about already. Others, I started to dig up once I started writing the book. What I wanted to do was map not only my journey with Heather to these different cities in our wedding journey, but also uncover these relatively hidden histories of other people who were, themselves, ghost wives, from 50, 100 or 150 years ago. Just because you don’t always see this history doesn’t mean it’s not there. It was important for me to feel like we had these predecessors, these people who were so brave. I wanted to create a link.’

Unexpectedly, Dicinoski also found herself writing about her own hidden history and the secrets that wound their way up her family tree. Her great-grandfather was Japanese, her mother grew up in a children’s home and had her sister taken away – they were part of a generation that the federal government now acknowledges as the Forgotten Australians.

‘When I started digging into my childhood and teenage years, I was surprised at how related these stories seemed to be,’ Dicinoski says. ‘Throughout history, different kinds of stories have been silenced, for different reasons.’ Another reason Dicinoski included these histories was to properly explain and contextualise her parents’ discomfort with the idea of her marriage to Heather. ‘In order to write about them – and how they happen to feel this way – I needed to acknowledge: they’re not just my parents. They’re people with this whole history.’

It’s easy to see how Ghost Wife – published just in time for Mardi Gras – might be seen as a clarion call for equal marriage. Dicinoski says she’s still getting her head around the possibility of being a spokesperson for the cause. At the same time, she has always attended protests and marches, and still feels palpable frustration towards the government’s lack of progress on the issue.

‘I’m extremely frustrated,’ she says. ‘But I’m also sort of beyond being frustrated, because I was frustrated for so long. I’m resigned to it taking a lot longer than I thought it would.’ However, she adds, she used to take it more personally than she does now. ‘You know when Penny Wong said on Q&A, “I know what my family’s worth”? It’s like that. I used to feel like I maybe needed the law to change to feel like I was married. Now I just know. I’m married. And I have been for quite a while now.’ She laughs. ‘The public support is there, but I’ve just become more realistic about how slow the legal side of things is to change.’

However, Ghost Wife is not all serious. There are some tragi-comic moments, like the chapter where Michelle and Heather must decide what they’re going to wear to the wedding, resulting in a grand-mal meltdown at a department store.

‘It’s a funny section of the book,’ Dicinoski says. ‘In some ways, it encapsulates so much about this situation. You don’t know what to do. How do you have a gay wedding? You don’t know! Our wedding was the first same-sex wedding we ever went to.’ She laughs. ‘In retrospect, I actually wish I wore something else now.’ Which, when you think about it, makes her not too different to most other brides then.

Benjamin Law is the author of The Family Law and Gaysia: Adventures in the Queer East. 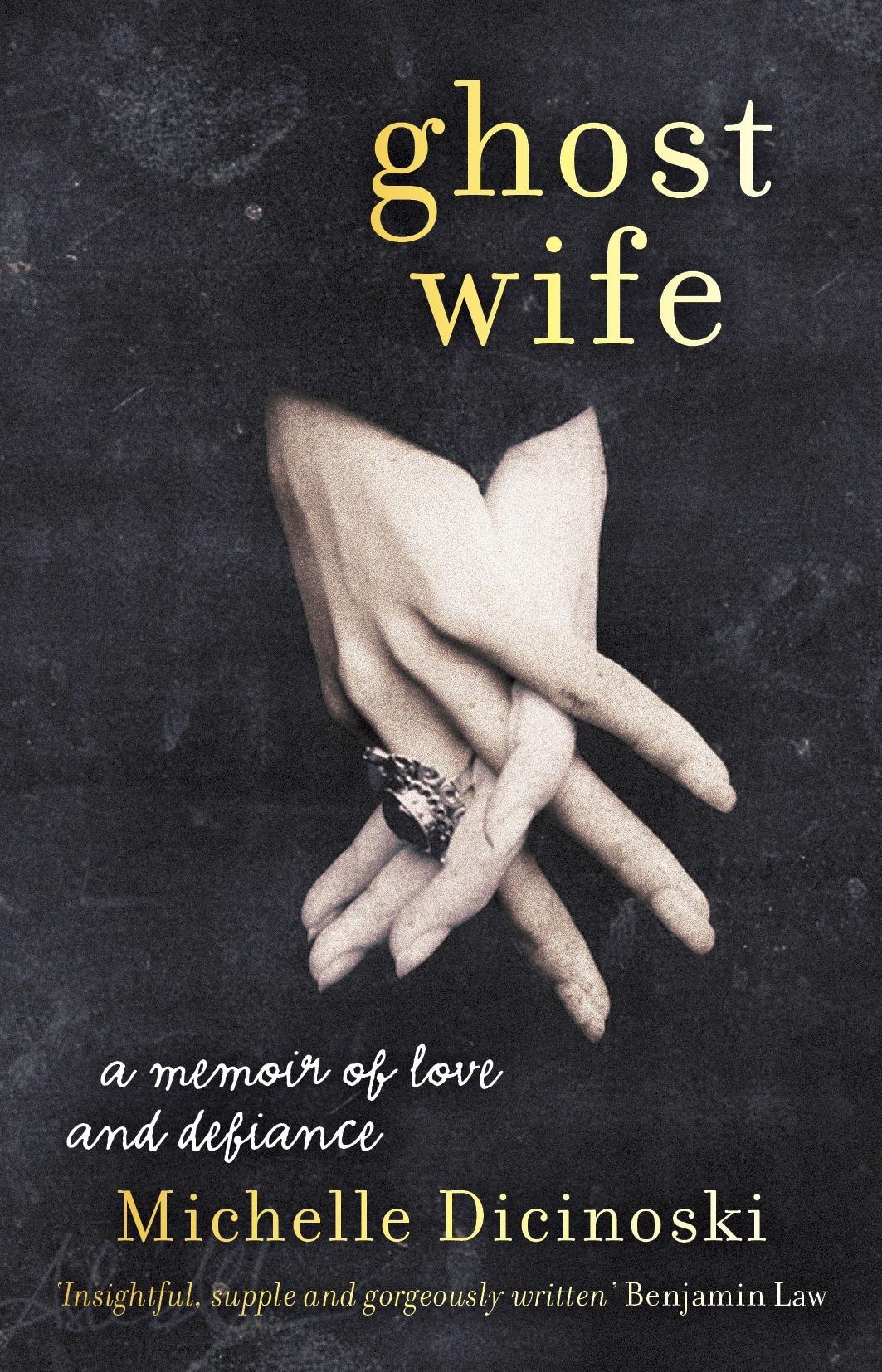