Five women attempt the impossible - to love, to be strong, and to stay true to themselves. Bookseller Paula has lost a child, and a husband. Where will she find her happiness? Fiercely independent Judith thinks more of horses than men, but that doesn’t stop her looking for love online. Brida is a writer with no time to write, until she faces a choice between her work and her family. Abandoned by the “perfect” man, Malika struggles for recognition from her parents. Her sister Jorinde, an actor, is pregnant for a third time, but how can she provide for her family alone?

Love in Five Acts explores what is left to five women when they have fulfilled their roles as wives, mothers, friends, lovers, sisters and daughters.

The Field by Robert Seethaler (translated by Charlotte Collins)

If the dead could speak, what would they say to the living?

From their graves in the field, the oldest part of Paulstadt’s cemetery, the town’s late inhabitants tell stories from their lives. Some recall just a moment, perhaps the one in which they left this world, perhaps the one that they now realize shaped their life forever. Some remember all the people they’ve been with, or the only person they ever loved.

These voices together - young, old, rich poor - build a picture of a community, as viewed from below ground instead of from above. The streets of the small, sleepy provincial town of Paulstadt are given shape and meaning by those who lived, loved, worked, mourned and died there.

Whereabouts by Jhumpa Lahiri (translated by the author)

The woman moves through the city, her city, on her own.

She moves along its bright pavements; she passes over its bridges, through its shops and pools and bars. She slows her pace to watch a couple fighting, to take in the sight of an old woman in a waiting room; pauses to drink her coffee in a shaded square.

Sometimes her steps take her to her grieving mother, sealed off in her own solitude. Sometimes they take her to the station, where the trains can spirit her away for a short while. But in the arc of a year, as one season gives way to the next, transformation awaits. One day at the sea, both overwhelmed and replenished by the sun’s vital heat, her perspective will change forever.

Civilisations is the world as we don’t know it: set at different points in history it links stories about characters in different places and times, all hungry to explore and to acquire power.

Binet’s novel is nothing less than a strangely believable counter-factual history of the modern world, fizzing with ideas about colonisation, empire-building and the eternal human quest for domination. It is an electrifying novel by one of Europe’s most exciting writers.

Thirteen-year-old Brian lives in a trailer on a forgotten patch of land with his divorced and uncaring father. His older brother Lucien, physically and mentally disabled, has been institutionalised for years. While Lucien’s home is undergoing renovations, he is sent to live with his father and younger brother for the summer. Their detached father leaves Brian to care for Lucien’s special needs.

But how do you look after someone when you don’t know what they need? How do you make the right choices when you still have so much to discover?

Summer Brother is an honest, tender account of brotherly love.

The Girl Who Died by Ragnar Jonasson (translated by the author)

Una is devastated after the suicide of her father. So when she sees an advert seeking a teacher for two girls in Skálar on the storm-battered north coast of the island, she sees it as a chance to escape.

But once she arrives, Una quickly realises nothing in city life has prepared her for this. The villagers are unfriendly. The weather is bleak. And, from the creaky attic bedroom in the old house she’s living, she’s convinced she hears the ghostly sound of singing.

Una worries that she’s losing her mind. And then, just before Christmas, there’s a murder …

Welcome to Buenos Aires, a city thrumming with murderous intentions and morbid desires, where missing children come back from the dead and unearthed bones carry terrible curses.

These brilliant, unsettling tales of revenge, witchcraft, fetishes, disappearances and urban madness spill over with women and girls whose dark inclinations will lead them over the edge. 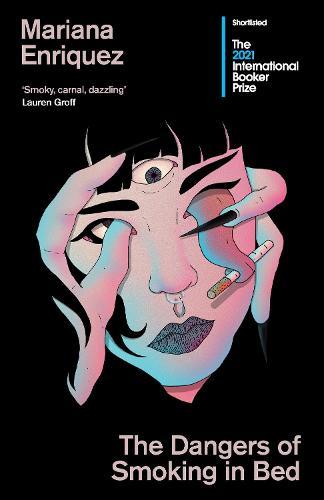 The Dangers of Smoking in Bed