It’s often difficult for emerging writers, particularly of longer works, to find spaces to showcase their craft – and the same is true for emerging editors, who can find it difficult to make a name for themselves in a role which is meant to be largely invisible. Seizure’s Viva La Novella Prize, now in its third iteration, combines the two in a yearly competition, teaming up emerging editors with emerging writers, who work together over several months bringing a novella manuscript to publication.

Novellas are sometimes seen as the overlooked middle child of the literary world, pushed aside by the economics of publishing. Longer than a short story, not quite a novel, some of the best stories in English – Heart of Darkness, Metamorphosis – have taken the form. However, the novella is seeing something of a resurgence in recent years, with publishers recognising the desire for short but fully realised stories. This year’s Viva La Novella competition has produced three compelling new works which show the flexibility of the form.

Marlee Jane Ward’s Welcome To Orphancorp (edited by Zoya Patel) is a punchy dystopian YA snapshot of the teenage Mirii’s last few days at an industrial orphanage. The young people held in Verity Houses, dotted around the Australian countryside are monitored, locked up, shipped around arbitrarily and put to work, cogs in a machine that is ruthless in its cold logic. In between the drudgery and Orwellian language, Mirii and her friends make their own spaces for friendship, sex and rebellion – but kids are starting to disappear from the Verity House without a trace. Ward’s writing is playful and inventive, brimming with teenage energy; the world of Orphancorp fully realised, down to minor details. Mirii is a ripper of a protagonist – queer and super gutsy – and the other orphans are diverse, complex and resourceful. If you’re a fan of YA, dystopia or just a rollicking read, Welcome To Orphancorp will have you hooked, right up to its cliffhanger ending.

The near-future setting of Jane Rawson’s Formaldehyde (edited by Marisa Wikramanayake) is much more recognisable, but there are hints of mild dystopia here too – a technicality at the Identity Office means that Paul finds himself wiped from existence. A modern-day Arthur Dent, his house is boarded up for no apparent reason, his bank account disabled, and his work kindly asks him to leave on account of being dead. Twenty years earlier, a nurse named Derek finds himself captivated by a mysterious girl named Benjamin, while his wife Amy somehow falls pregnant to her female lover. Meanwhile, Benjamin is an enigma – her story seems impossible. Formaldehyde skips across decades and flits back and forth between the points-of-view of four different characters whose edges are malleable. A delicious blend of science fiction and magical realism, of severed limbs and Russian novels, a tale this gloriously weird and absurdly funny needs an expert hand to guide us through. And Rawson handles the changes in tense, setting and point-of-view expertly, making Formaldehyde a baffling, joyous and addictive read.

Christy Collins’ The End of Seeing (edited by Nicola Redhouse) is a departure in tone from the other two novellas, beginning with a more subdued, literary-fiction tone, grounded firmly in realism. Ana, already grieving over the loss of her daughter, now finds herself grappling with the disappearance of her photojournalist husband Nick, presumed drowned on an asylum seeker boat shipwrecked in the Mediterranean. Guided by his photographs, she heads from Melbourne to Europe to seek out the truth. As Nick’s fate becomes ever murkier, the story shifts up a gear to become a full-blown mystery story involving the desperate plight of those fleeing war-torn northern Africa. Collins’ descriptions of grief are heart-rending and starkly beautiful, and its perceptiveness and empathy for the asylum seekers’ plight timely and necessary.

The novellas are entirely discrete creations, but reading them as a set, it’s interesting to see how themes overlap – Orphancorp’s gritty dystopia versus Formaldehyde’s odd future, both of which are thrown into sharp relief by the realism of the present day in The End of Seeing. Ward’s and Rawson’s novellas bristle with energy – the former full of youthful rebellion against an oppressive regime, the latter the boundless potential of the absurd – while Collins’ tone is quieter, darker as it builds gradually in tension and intrigue.

All three of the Viva La Novella winners play to the strengths of the novella format – they are well-paced, economical and feel neither rushed nor ponderous. Individually, or as a set, the three novellas are a worthy addition to any bookshelf. 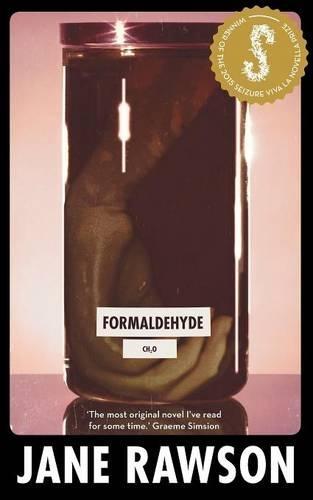 Lives turned upside down by a bureaucratic error in this Kafkaesque work of neo-absurdism.

The End of Seeing

Determined to discover the truth about the disappearance of her partner, Nick, Ana sets out to re-trace the route he took as a photojournalist on the other side of the world - a journey that saw him presumed dead, on a ship...

A sharp-edged semi-futuristic riff about a rebellious teenager's last week at an industrial orphanage.