Continuing our totally-and-completely-fail-proof-Christmas-shopping-guides-for-2013, here are 20 gift ideas for less than $20!

Over its remarkable one hundred and twenty years, Vogue has served as a photographic and literary authority for its readers, publishing timeless classics by acclaimed photographers such as Irving Penn and Erwin Blumenfeld, iconic imagery by modern masters including Annie Leibovitz and Mario Testino, and classic illustrations by famous artists such as Salvador Dali, Erté and Eduardo Benito. This selection of one hundred of the publication’s most iconic covers is not to be missed.

Reflective, insightful and disarmingly honest, Waging Heavy Peace is Neil Young’s long-awaited memoir. From his youth in Canada to his crazy journey out to California, through Buffalo Springfield and Crosby, Stills & Nash, to his massively successful solo career and his re-emergence as the patron saint of grunge on to his role today as one of the last uncompromised and uncompromising survivors of rock ‘n’ roll – this is Neil’s story told in his own words.

3. Schottenfreude: German Words for the Human Condition ($19.99) by Ben Schott

From the author of the Schott’s Miscellanies and Schott’s Almanac, comes a book for anyone who ever thought, ‘shouldn’t there be a German word for that?’ After all, in which language but German could you construct le mot juste for: a secret love of bad food, the inability to remember jokes, reassuring your hairdresser, or the ineffable pleasure of a cold pillow?

When asked to talk to students at Broome Community College in upstate New York in the spring of 2011, Austin Kleon wrote a simple list often things he wished he’d heard when he was their age. After giving the speech, he posted the text and slides to his popular blog, where it quickly went viral. Now Kleon has expanded his original manifesto into an illustrated guide to the creative life for writers, artists, entrepreneurs, designers, photographers, musicians, and more.

The Lure of the Japanese Garden takes you on a tour of 120 gardens across Japan. Along the way Alison Main and Newell Platten describe not only the garden’s physical aspects, but also the historical, symbolic, religious and meditative meanings, purposes and allusions embodied in them. Essays offer personal and amusing insights into the authors' travels in Japan and maps and comprehensive directions show the reader how to visit each garden.

A lavishly illustrated gift book in a travel-friendly size, Shannon Bennett’s Paris is the book you’ll want in your handbag and backpack when travelling to the ‘city of love’. The guidebook includes Shannon Bennett’s favourite three-star restaurants, bistros, bars and hotels, alongside his pick of the best places to buy macaroons, bread, wine, chocolate, truffles and caviar.

7. A Gentleman’s Guide to Beard and Moustache Management ($19.95) by Chris Martin

Do you know how to trim your whiskers properly? With beards and moustaches more popular than ever, this delightful little book sets out to answer this pressing question, and also includes: a guide to famous facial-hair aficionados; a breakdown of styles; and a perambulation through hirsute history, including an explanation of why the beard was considered sacred by the ancient Greeks.

Yee is today’s preeminent practitioner of origami architecture and a master paper crafter who has dedicated his life to creating scale paper models of the world’s most famous buildings. The Origami Architecture Kit features three of his most popular designs: The Eiffel Tower, The White House and The Sydney Opera House. The kit contains a detailed full-colour instruction booklet with more than 150 photos to guide your paper crafting adventure.

To our great delight, Canadian author Alice Munro was awarded the Nobel Prize in Literature earlier this year! And if you haven’t read her yet, Dear Life is a great place to start. Moments of change, chance encounters, the twist of fate that leads a person to a new way of thinking or being: the stories in this collection build to form a radiant, indelible portrait of just how dangerous and strange ordinary life can be.

Available exclusively at Readings, Oslo Davis' 2013-2014 calendar features cartoons that go out of their way to celebrate the misery of life. Well, not really, but Oslo’s wry take on the minutiae of existence makes this calendar a rare beast indeed. Drawn from his cheeky work done in the Age, the Readings Monthly and beyond, this limited-edition calendar features crack whores, cows in tights, Banksy street art, kiddie tattoos, dubious brooches and more.

Beginning the year as the BBC Sound of 2013 winners, off the back of two limited edition EPs and a handful of sold-out UK live dates, HAIM holed themselves up in the studio and spent the next few months perfecting their first record. Days Are Gone wrestles with that early live potential and fully realises it, showcasing the breadth of their collective and individual talents, as well as their innate understanding of each other’s musicianship.

Wes Anderson’s Moonrise Kingdom is set on an island off the coast of New England in the summer of 1965 and tells the story of two 12-year olds who fall in love, make a secret pact to run away together into the wilderness. With a cast including Bruce Willis, Edward Norton, Bill Murray and Frances McDormand, the film aptly ‘captures the texture of childhood summers’ (Christopher Orr of The Atlantic).

Seductive, fearless, and outrageous, Marina Abramovic has been redefining what art is for nearly 40 years. Using her own body as a vehicle, pushing herself beyond her limits - and at times risking her life in the process - she creates performances that challenge, shock, and move us. Marina Abramovic: The Artist Is Present follows the artist as she prepares for a major new retrospective of her work.

Lake Eyre seldom sees water. Most of the time it is a vast salt pan, eerily empty, devoid of all life. But when the rains come and the great rivers flow down to its basin, an astonishing transformation takes place: the landscape fills with colour, with bird and animal life. Here, accompanied by stunning photographs, journalist Paul Lockyer tells the lake’s remarkable story.

First published this Spring in the New Yorker, The Embassy of Cambodia is a rare and brilliant story that takes us deep into the life of a young woman, Fatou, domestic servant to the Derawals and escapee from one set of hardships to another. Beginning and ending outside the Embassy of Cambodia, which happens to be located in Willesden, NW London, Zadie Smith’s story suggests how the apparently small things in an ordinary life always raise larger, more extraordinary questions.

Kurt Vile is slowly, quietly becoming one of the great American guitarists and songwriters of our time. This 69-minute album is comprised of sweeping, expansive songs that are both very intimate and conversational. Beautifully produced by John Agnello, the record is filled with hazy, swooning guitar lines and dreamy, beatific, and occasionally sardonic vocals.

Just how well can you ever know the person you love? This is the question that Nick Dunne must ask himself on the morning of his fifth wedding anniversary when his wife Amy suddenly disappears. The police immediately suspect Nick. Amy’s friends reveal that she was afraid of him, that she kept secrets from him. He swears it isn’t true. So what really did happen to Nick’s beautiful wife? And what was in that half-wrapped box left so casually on their marital bed?

The Design Book is the greatest collection of inspirational product design in one affordable and collectable book. It showcases 500 of the most innovative, beautiful and influential products from the last five centuries that are still in production today. Each entry includes an image and a descriptive caption, providing accessible information about the product, designer, manufacturer and history.

Young or old, boy or girl, everybody loves a train set. This fun-sized train set packs up into a tin so you can take it just about anywhere and runs on just a single AA battery.

If you’re looking for more gift ideas than browse our Summer Reading Guide or our picks for best books, music and films in 2013, or come visit one of our stores to chat with us in person. 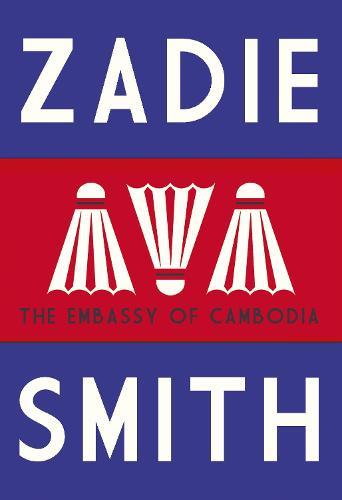 The Embassy of Cambodia