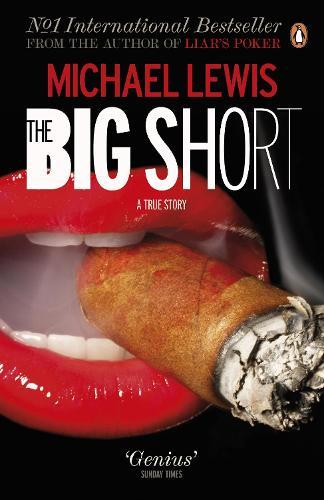 The Big Short tells a story of spectacular, epic folly.

It has taken the world’s greatest financial meltdown to bring Michael Lewis back to the subject that made him famous. His international bestseller Liar’s Poker exposed the greed and carnage of the City and Wall Street in the 1980s; he wrote it as a cautionary tale, but people seem to have read it as a how-to guide. Now, he wants to settle accounts.
In this visceral tour to the heart of the financial system, Michael Lewis takes us around the globe and back decades to trace the origins of the current crisis. He meets the people who saw it coming, the people who were asleep at the wheel and the people who were actively driving us all of a cliff. How could we have all been so deluded for quite so long? Where did it all start? Was it systemic? Was it avoidable? And who the hell can we blame? Michael Lewis has the answers.
No one is better qualified to get to the heart of this labyrinthine story. And no one can make it such an enjoyable ride along the way.
$24.95Add to basket ›

The People vs The Banks

The Short Goodbye: Skewed History of the Last Boom and the Next Bust

Elisabeth Wynhausen was at her desk writing a story about people being sacked when she was sacked herself. The Short Goodbye is the untold story of a nation forever changed by the global financial crisis and the people whose lives...

The Failure of Free-Market Economics

Explains how the triumph of a fundamentally flawed economic orthodoxy has weakened the Australian economy and now threatens our future. Employment in Australia is now increasingly characterised by low-paid and insecure jobs in...

The great crash of 2008 was one that no one saw coming, or, if they did, they ignored the warning signs. This title takes us through the boom and the global imbalances that led to the bust. It presents a whole-world view of...

From the jungles of the trading floor to the casinos of Las Vegas, The Big Short, this title tells the story of the misfits, renegades and visionaries who saw that the biggest credit bubble of all time was about to burst, bet...

END_OF_DOCUMENT_TOKEN_TO_BE_REPLACED

Moneyball: The Art of Winning an Unfair Game

Liar’s Poker: From the author of the Big Short