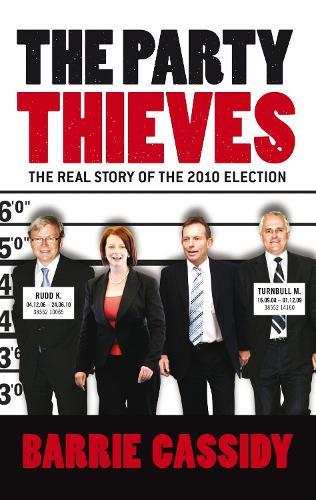 The Party Thieves is a rip-roaring, incisive analysis of a tumultuous nine months in politics. Barrie Cassidy picked a hell of an election to cover- changes of leaders on both sides of politics, Australia’s first female Prime Minister, a hung parliament and a country not knowing who its Prime Minister was for nearly three weeks. But in the beginning were the Party Thieves, Malcolm Turnbull and Kevin Rudd. Turnbull’s manic desire to get his own way in the party, and because he simply stopped listening, led to his demise. Rudd stole the party through his authoritarian approach to government and a cabinet that felt alienated from the job of governing. In both cases, the members of their respective parties came at the Party Thieves to reclaim what was rightfully theirs, and set the stage for the ascension of Tony Abbott and Julia Gillard. And all that before we even get to the 2010 election campaign. The Party Thieves is more than just a campaign diary of the extraordinary 2010 election and its aftermath; it is a rip-roaring, incisive analysis of a tumultuous nine months in politics that even surprised veteran journalists such as Cassidy. This is a must read for anyone interested in Australian politics of any persuasion.