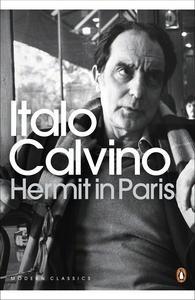 With a Preface by Esther Calvino ‘These pages are distinguished by a sly philosophic humour … a sensuous immediacy of detail and a droll wit’ Guardian In this elegant collection of essays, one of modern literature’s most enchanting masters reminisces about Italy’s antifascist resistance and the whirl of ideas that blossomed in the post-war era. In America, Calvino follows Nixon’s election hopes while marvelling at colour television and American cars, but describes with loathing his first experience of mass racism, when he is lucky enough to meet Martin Luther King in Alabama. He also writes brilliant short pieces on his Italian dialect, the final day of the Second World War, and the rich joys of living in Paris. A stylish assortment of memoir and wit, Hermit in Paris includes the very finest of Calvino’s superb work. ‘Beautifully written … the work of an extraordinary mind, one that is worth exploring from every angle’ Independent on Sunday