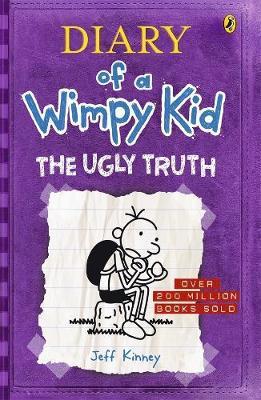 Greg Heffley has always been in a hurry to grow up. But is getting older really all it’s cracked up to be? Greg suddenly finds himself dealing with the pressures of boy-girl parties, increased responsibilities, and even the awkward changes that come with getting older - all without his best friend, Rowley, at his side. Can Greg make it through on his own? Or will he have to face the ‘ugly truth’?

Poor Greg. Another school year, and after a run-in with best friend Rowley, he’s going to have to face it alone. Not that he’s letting it get him down that much. The way he sees it, Rowley will come crawling back any day now. But in the meantime Rowley has replaced Greg with a rent-a-friend called Cool Brian.

Rather than apologise, Greg figures it’s best to move on and find himself a new best friend too, but that’s hard when there are only the dregs like Fregley left. And to make matters worse, Greg is getting the growing-up talk from everyone he meets - the teachers, his parents, and even his ancient Great Grandmother Gammie, who’s the last person he wants to talk to about things like noticing girls.

The ugly truth is that sooner or later, everyone has to grow up, but Greg’s trying to hold on as long as possible, whether that means auditioning for an ice-cream commercial with a bunch of preschoolers or still going to Tender Hugs Paediatric Dental Care. But how much longer can Greg hold out when the pressure is on to grow up and stop messing around?

The Ugly Truth is the fifth book in the hysterically funny Diary of a Wimpy Kid series by Jeff Kinney. By now just about everyone should have heard of these books, but if you haven’t read them yet, do yourself a favour and get started - Greg’s disastrous life will have you laughing out loud.

Diary of A Wimpy Kid

END_OF_DOCUMENT_TOKEN_TO_BE_REPLACED

The Third Wheel: Diary of a Wimpy Kid (BK7)

Diary of a Wimpy Kid #5: The Ugly Truth

Greg Heffley has always been in a hurry to grow up. But is getting older really all it's cracked up to be?Greg suddenly finds himself dealing with the pressures of boy-girl parties, increased responsibilities, and even the awkward...