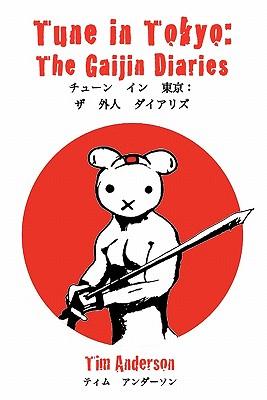 Everyone wants to escape their boring, stagnant lives full of inertia and regret. But so few people actually have the bravery to run, run away from everything and selflessly seek out personal fulfillment in another part of the world where they don’t understand anything and won’t be expected to. The world is full of cowards. Tune in Tokyo: The Gaijin Diaries, an irresistible new gay, left-handed, diabetic travel memoir by North Carolina native Tim Anderson, takes a heady ride through the great Japanese megalopolis, bobbing, weaving, and karate kicking its way through the shadowy, dangerous underworld of a Harajuku girl-phobic, viola-playing, kabuki-tastic English conversation instructor on a mission to blast himself out of the creative and professional rut he’s in and also do some record shopping. Tune in Tokyo illuminates the colorful gaijin life of a young-ish American gaywad who, stuck in Ennuiville with no good employment opportunities in his home city of Raleigh, NC, decides to jet across the world and magically make himself more marketable. He leaves behind his boyfriend, his cat, his CDs, and an increasingly misanthropic existential lifelessness and heads off to a city where the year is 2119 and the future is now. Or maybe tomorrow. Tune in Tokyo: The Gaijin Diaries is a collection of fish-out-of-water stories in which the fish flopping around gasping for breath (and English-language magazines) in the open air of planet Tokyo must slowly but surely learn to breathe, gain his footing, and walk on his own two legs. How else is he going to take himself to the new Uniqlo, use one of those beer vending machines, or buy a Hello Kitty dildo?