Catholics, Slaveholders, and the Dilemma of American Evangelicalism, 1835-1860 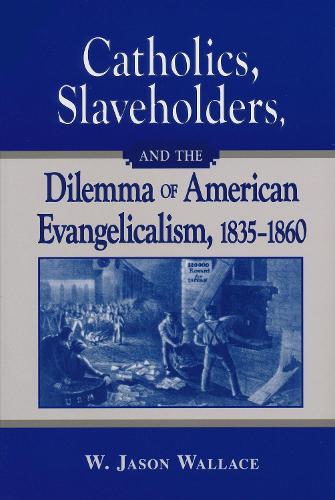 Catholics, Slaveholders, and the Dilemma of American Evangelicalism, 1835-1860

Although slaveholding southerners and Catholics in general had little in common, both groups found themselves relentlessly attacked in the northern evangelical press during the decades leading up to the Civil War. In Catholics, Slaveholders, and the Dilemma of American Evangelicalism, 1835-1860, W. Jason Wallace skillfully examines sermons, books, newspaper articles, and private correspondence of members of three antebellum groups-northern evangelicals, southern evangelicals, and Catholics-and argues that the divisions among them stemmed, at least in part, from disagreements over the role that religious convictions played in a free society. Focusing on journals such as The Downfall of Babylon, Zion’s Herald, The New York Evangelist, and The New York Observer, Wallace argues that northern evangelicals constructed a national narrative after their own image and, in the course of vigorous promotion of that narrative, attacked what they believed was the immoral authoritarianism of both the Catholic and the slaveholder. He then examines the response of both southerners and Catholics to northern evangelical attacks. As Wallace shows, leading Catholic intellectuals interpreted and defended the contributions made by the Catholic Church to American principles such as religious liberty and the separation of church and state. Proslavery southern evangelicals, while sharing with evangelicals in the North the belief that the United States was founded on Protestant values, rejected the attempts by northern evangelicals to associate Christianity with social egalitarianism and argued that northern evangelicals compromised both the Bible and Protestantism to fit their ideal of a good society. The American evangelical dilemma arose from conflicting opinions over what it meant to be an American and a Christian.