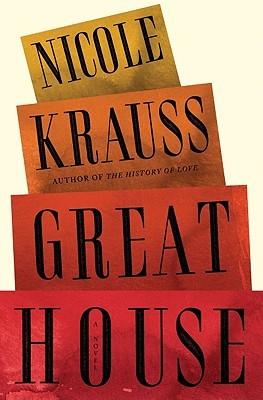 The novel consists of four stories divided among eight chapters, all touching on themes of loss and recovery, and anchored to a massive writing desk that resurfaces among numerous households, much to the bewilderment and existential tension of those in its orbit, among them a lonely American novelist clinging to the memory of a poet who has mysteriously vanished in Chile, an old man in Israel facing the imminent death of his wife of 51 years, and an esteemed antiques dealer tracking down the things stolen from his father by the Nazis.

Much like in Krauss’s The History of Love, the sharply etched characters seem at first arbitrarily linked across time and space, but Krauss pulls together the disparate elements, settings, characters, and fragile connective tissue to form a formidable and haunting mosaic of loss and profound sorrow.

First of all, a confession: Krauss’s previous book, The History of Love, is one of my favourites. This made reading her next novel difficult: I was so frightened of being disappointed, of having that dreaded moment when you realise the story is not for you. But Great House is just as brilliant. Interestingly, the title comes from an institute of learning set up in Yavne in the first century, to continue, preserve and enrich Jewish learning after the Romans’ victory over the Jews. The work is not yet finished, it seems, as demonstrated by Krauss’s portrayal of those struggling to find meaning in their lives.

The novel centres on a desk stolen from Budapest in 1944 and the son who has spent his lifetime, no matter the cost to his family, looking to recreate his pillaged father’s study by finding it. The novel therefore takes us on a journey to those who have held the desk. For 25 years, a solitary American novelist had used it as her writing desk, having inherited it from a young poet who disappeared at the hands of Pinochet’s secret police. A girl comes to reclaim the desk from the novelist, sending her life reeling. Across the ocean in London, a man discovers a terrifying secret about his writer wife of almost 50 years. The stolen desk becomes the obsession of these four main characters as the implications of loss become clearer.

Krauss’s theme of fragility is heart-wrenching at times. The loss of dignity of the writer in Jerusalem, the canniness of the daughter of the antiques dealer, the resolute pride and fear of the ageing husband in London, all become part of the wonderful global portrayal of humanity. Great House is a powerful novel about people struggling to create a significant connection in the face of inevitable loss. Like she did in The History of Love, Nicole has created a astonishing illusion that she speaks for us all. Allow a weekend of reading.

Krauss pens a powerful, soaring novel about a stolen desk that contains the secrets, and becomes the obsession, of the lives it passes through.

The History of Love

Fourteen-year-old Alma Singer is trying to find a cure for her mother's loneliness. Believing she might discover it in an old book her mother is lovingly translating, she sets out in search of its author. Across New York an old...

Krauss pens a powerful, soaring novel about a stolen desk that contains the secrets, and becomes the obsession, of the lives it passes through.