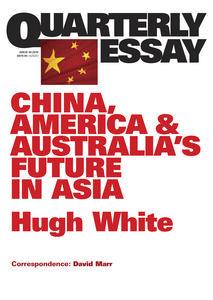 In the third Quarterly Essay of 2010, Hugh White considers Australia’s future between Beijing and Washington. As the power balance shifts, and China’s influence grows, what might this mean for our nation? Throughout our history, we have counted first on British then on American primacy in Asia. Now the rise of China as an economic powerhouse challenges US dominance and raises questions for Australia that go well beyond diplomacy and trade - questions about our place in the world, our loyalties and our long-term security. Will China replace the US as regional leader? If so, we will be dealing with an undemocratic and vastly more powerful nation. Will China wield its power differently from the US? If so, should we continue to support America and so divide Asia between our biggest ally and our biggest trading partner? How to define the national interest in the Asian century? This visionary essay considers the shape of the world to come and the implications for Australia as it seeks to carve out a place in the new world order. ‘This year China overtook Japan to become the world’s second-biggest economy. It is already bigger, relative to the US, than the Soviet Union ever was during the Cold War. A Chinese challenge to American power in Asia is no longer a future possibility but a current reality. Few issues are more important to Australia’s future than how this plays out. You would not know it to listen to our leaders.’ Hugh White, Power Shift

END_OF_DOCUMENT_TOKEN_TO_BE_REPLACED

This essay considers Australia's place between China and the US. As the power balance shifts and China's influence grows, what might this mean for the nation? How to define the national interest in the Asian Century? It considers...

END_OF_DOCUMENT_TOKEN_TO_BE_REPLACED

As Australians, we traditionally see ourselves as friendly, relaxed and connected people. But is this an outdated stereotype? The data from our census and other surveys show that Australian society is shifting rapidly. Leigh...

People Power: The history and the future of the referendum in Australia

From the failed attempt to ban communism in 1951 to the unsuccessful republican referendum of 1999, Australians have been cautious about constitutional change, approving only eight out of 44 referendum proposals in just over 100...

This essay considers Australia's place between China and the US. As the power balance shifts and China's influence grows, what might this mean for the nation? How to define the national interest in the Asian Century? It considers...

Money and Politics: The Democracy We Can’t Afford

Money plays a controversial role in Australian politics. Political donations may spark claims of secret contributions and corruption. Do corporations or trade unions have undue infl uence over political parties by way of...