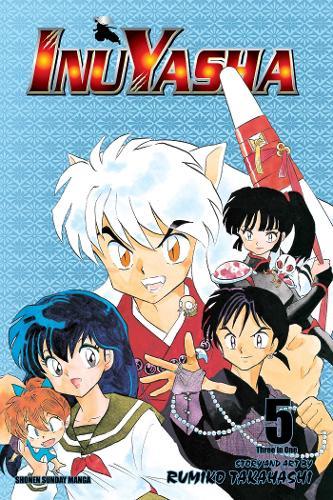 Rumiko Takahashi’s epic in a large prestige format including bonus color pages! Kagome is an ordinary modern schoolgirl living an ordinary life. Who would have thought the dried-up old well on the site of her family’s shrine would be a gateway to Japan’s ancient past? Drawn through the gate against her will, Kagome finds herself battling demons for control of what she thought was a worthless trinket but is actually a powerful magical gem, the Shikon Jewel! Together with an unlikely ally, the half demon Inuyasha, Kagome begins a quest to recover the shards of the Shikon Jewel and learn more about her link to the past. Kagome and Inuyasha have an angry argument that won’t be settled until someone apologizes, but each of them is just as stubborn as the other! While Kagome and Inuyasha work things out, Naraku sends forth one of his own most enigmatic minions, a woman with the power to control the dead. As Naraku’s plans unfold, Sesshomaru finds an unexpected reason to question his demonic nature. Between covetous wolf demons and Naraku’s powerful illusions, Kagome and Inuyasha face even more difficult challenges!