Bringing the State Back In 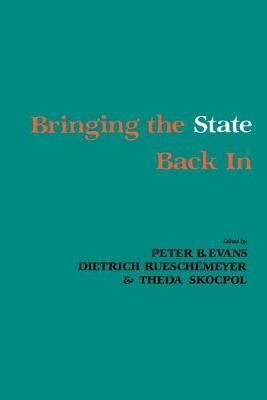 Bringing the State Back In

Until recently, dominant theoretical paradigms in the comparative social sciences did not highlight states as organizational structures or as potentially autonomous actors. Indeed, the term ‘state’ was rarely used. Current work, however, increasingly views the state as an agent which, although influenced by the society that surrounds it, also shapes social and political processes. The contributors to this volume, which includes some of the best recent interdisciplinary scholarship on states in relation to social structures, make use of theoretically engaged comparative and historical investigations to provide improved conceptualizations of states and how they operate. Each of the book’s major parts presents a related set of analytical issues about modern states, which are explored in the context of a wide range of times and places, both contemporary and historical, and in developing and advanced-industrial nations. The first part examines state strategies in newly developing countries. The second part analyzes war making and state making in early modern Europe, and discusses states in relation to the post-World War II international economy. The third part pursues new insights into how states influence political cleavages and collective action. In the final chapter, the editors bring together the questions raised by the contributors and suggest tentative conclusions that emerge from an overview of all the articles. As a programmatic work that proposes new directions for the analysis of modern states, the volume will appeal to a wide range of teachers and students of political science, political economy, sociology, history, and anthropology.