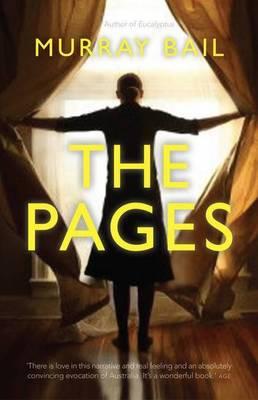 On a family sheep station in western New South Wales, a brother and sister work the property while their reclusive brother, Wesley Antill, spends years toiling away in one of the sheds, writing his philosophy. Now he has died. Erica, a philosopher, is sent from Sydney to appraise his life’s work. Accompanying her is Sophie, who needs distracting from a string of failed relationships. Her field is psychoanalysis. The pages Wesley wrote lie untouched in the shed, just as he left them. What will they reveal? Was he a genius? These turn out to be only a couple of the questions in the air. How will the visit change the lives of Erica and Sophie? The Pages is a beguiling meditation on friendship and love, on men and women, on landscape and the difficulties of thought itself, by one of Australia’s greatest novelists, the author of the much-loved Eucalyptus.

In his fourth novel, Murray Bail presents a philosophical mystery. Erica Hazlehurst, philosopher at the University of Sydney is summoned to the office of the head of the department. ‘Philosophy has been called upon.’ The late Wesley Antill, the eldest son of a pastoralist, has bequeathed money in his will for the publication of his work. After crashing philosophy courses as a young man, Wesley decided he wanted to be a philosopher. After many years, he returned to the family property, where he retired to an old shed and began to think and write.

‘Is he a genius in philosophy? We have no idea. That’s where you come in,’ Mr Mannix, the solicitor, tells Erica. And so Erica, taking her psychotherapist friend Sophie along for company, sets off for Antill homestead. Wesley’s sister Lindsey, a ‘practical and sensible woman’, welcomes them quietly, while his brother Roger, the farm manager, is a mysterious and enigmatic figure. Bail draws us to Wesley’s strange and ultimately uneventful life and the incongruous impact it has on the lives of Erica, Sophie, Lindsey and Roger. The Pages is a warm, whimsical tale about life, love and perhaps philosophy from a master tale-spinner.

Erica Hazelhurst, a philosopher from Sydney, has been given a project by her university to work on the papers of the late Wesley Antill (The Pages). She travels across the Blue Mountains to his country property with her...

END_OF_DOCUMENT_TOKEN_TO_BE_REPLACED

The Boat takes us from a tourist in Tehran to a teenage hit man in Colombia; from the city of Hiroshima just before the bomb is dropped to the haunting waste of the South China Sea in the wake of another war. Each story is...

Maya de Jong, a country girl, comes to live in Melbourne and starts an affair with her boss. When Maya's parents, Toni and Jacob, arrive to stay with her, they are told by her housemate that Maya has gone away and no one knows...

Erica Hazelhurst, a philosopher from Sydney, has been given a project by her university to work on the papers of the late Wesley Antill (The Pages). She travels across the Blue Mountains to his country property with her...