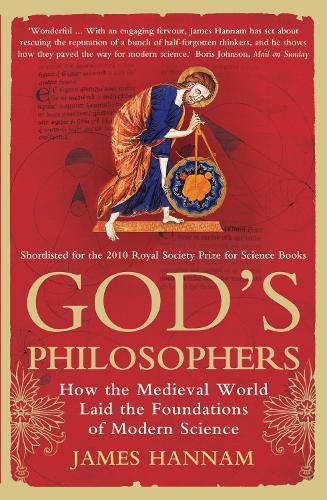 The adjective ‘medieval’ has become a synonym for brutality and uncivilised behaviour. Yet without the work of medieval scholars there could have been no Galileo, no Newton and no Scientific Revolution. In God’s Philosophers, James Hannam debunks many of the myths about the Middle Ages, showing that medieval people did not think the earth was flat, nor did Columbus prove that it is a sphere; the Inquisition burnt nobody for their science nor was Copernicus afraid of persecution; no Pope tried to ban human dissection or the number zero. God’s Philosophers is a celebration of the forgotten scientific and technological achievements of the Middle Ages. Charting an epic journey through six centuries of history, it brings back to light the discoveries of neglected geniuses like John Buridan, Nicole Oresme and Thomas Bradwardine, as well as putting into context the contributions of more familiar figures like Roger Bacon, William of Ockham and Saint Thomas Aquinas. ‘A spirited jaunt through centuries of scientific development.captures the wonder of the medieval world: its inspirational curiosity and its engaging strangeness.’ Sunday Times ‘Hannam, the liveliest of guides, makes enjoyable reading out of some seriously dusty history and difficult ideas.’ Scotsman ‘Here, in short, is a readable book, aimed at an intelligent but ignorant layman. You’ll enjoy it.’ Daniel Hannan MEP, Daily Telegraph

END_OF_DOCUMENT_TOKEN_TO_BE_REPLACED

Wired for War: The Robotics Revolution and Conflict in the 21st Century

The Way the World Is: The Christian Perspective of a Scientist

Evolution in the Antipodes: Charles Darwin and Australia