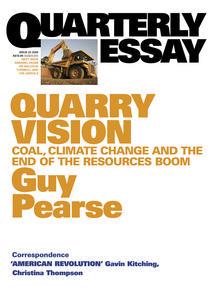 Why do our leaders pretend that they are leading the world in the battle against global warming? When do environmental risks outweigh economic benefits? Why dig deeper when the rest of the world is looking for alternatives to coal? This is an essay about ‘quarry vision,’ the belief that Australia’s greatest asset is its mineral and energy resources - coal above all. How has this distorted our national politics and stymied action on climate change? In this powerful essay about the national interest, Guy Pearse dissects the Rudd government’s climate change response- from the Garnaut report to the silver bullet of ‘clean coal’ and beyond. He exposes the shadowy world of the carbon lobbyists; how they think, operate and advance their agenda. He discusses the future of the coal industry and challenges the economic orthodoxy. Quarry vision, he argues, is a trap and a blind faith we can no longer afford. ‘A generation ago, our leaders showed courage and vision in pushing for unilateral trade liberalisation - they knew it was good for Australia no matter how fast others acted. They were right to turn Australia’s economy outward, and the establishment they challenged was wrong. Today the generation that was right on trade liberalisation has much of it wrong on climate change. They now wear the establishment mantle, and it is their turn to be challenged.’ Guy Pearse, Quarry Vision

This is an essay about 'quarry vision', the mindset that sees Australia's greatest asset as its mineral and energy resources, coal especially. How has this distorted our national politics and our response to climate change? What...

END_OF_DOCUMENT_TOKEN_TO_BE_REPLACED

This is an essay about 'quarry vision', the mindset that sees Australia's greatest asset as its mineral and energy resources, coal especially. How has this distorted our national politics and our response to climate change? What...

Too Much Luck: The Mining Boom and Australia’s Future

Shows that the resources boom, which seems like a blessing, has the potential to become a curse unless our governments take urgent action. This title maps out the pitfalls, considers what has worked overseas, and suggests a better...

Mine-field: The Dark Side of Australia’s Resource Rush