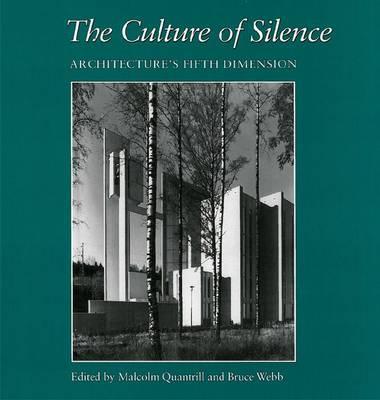 German playwright Berthold Brecht once observed that the Finns are silent in two languages. To those familiar with Finnish society and conversation, Brecht’s remark aptly summarizes the difficulty of exchanging pleasantries, let alone ideas, with Finns. Those who have come up against these impenetrable boundaries have asked themselves if the problem is climatic, sociocultural, Gemeinschaft without Gesellschaft, or some other explanation for the manifest unwillingness to confront and engage. The intent of these essays is to explore the notion of a culture of silence through the basis of the architectural culture of modern Finland. Roger Connah, British critic and author of the celebrated Writing Architecture, the infamous study of Finnish architecture in the culture of modernism, opens the debate with his monumental and provocative excavation of the seam where Finnish culture meets modern architecture, Not Only, but Also. Malcolm Quantrill brings to his editorial role in this collection his experience of Finnish society and architecture that spans four decades. His expertise in Alvar Aalto studies is focused here in his essay on Aalto’s Muffled Echoes of Cubism (the Kivett Lecture for 1994). In addition, Quantrill contributes two other specialized pieces on Reima Pietila and Juha Leiviska, the latter the recent winner of Denmark’s prestigious Carlsberg Prize. Kaisa Broner-Bauer, the first woman to be appointed to a chair of architecture in a Finnish university, continues the unfolding of the theme through her Aarno Ruusuvuori and the Continuity of Finnish Modernism. The argument is further elaborated by two nicely oblique pieces on Alvar Aalto’s contribution to Finland’s international role in modern architecture; these are by Randall Ott, who recently joined the permanent faculty of the University of Colorado at Denver. Although the explorations of The Culture of Silence are here rooted in Finnish architectural culture, the editors have extended the theme of the original 1993 CASA symposium to embrace aspects of silence within the architecture of other cultures as well. To this end, Claes Caldenby discusses a particular aspect of recent Swedish modernism by discussing those architects who have progressed In the Footsteps of Gunnar Asplund, while Drexel Turner reviews Renzo Piano’s approach to designing the Menil Foundation in Houston and Celeste Williams draws upon her recent work in Graz, Austria, to make a case for reassessing the significance of Austrian architecture of the 1980s and 1990s. Architects, both teaching and practicing; architecture students; and educated general readers interested in new developments in architecture as a reflection of culture will find this book a thought-provoking and informative volume.