The Strength of a Nation: Six years of Australians fighting for the nation and defending the homefront in World War II 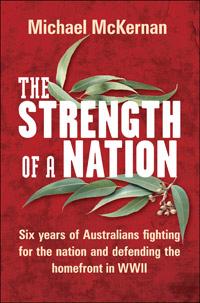 The Strength of a Nation: Six years of Australians fighting for the nation and defending the homefront in World War II

‘A terrific book. It is a story that subsequent generations should know, and this book is an excellent place for that journey of discovery and understanding to begin.’ - Canberra Times ‘Concisely and with verve, Michael McKernan covers a huge amount of ground.’ - The Sydney Morning Herald Nearly one million Australians out of a total population of just seven million people joined the armed forces in World War II. They made an enormous contribution to the allied war effort; they inflicted the first land defeat of the Japanese at Milne Bay in New Guinea during that war and played a crucial part in the Battle of El Alamein in North Africa, the first defeat on land of the Germans. These victories in battle were only made possible by their support from home. Still recovering from the First World War and the Great Depression the Australian population rallied to make these achievements possible. This is the story of Australia and Australians at war at home and abroad in the six years, 1939 to 1945.