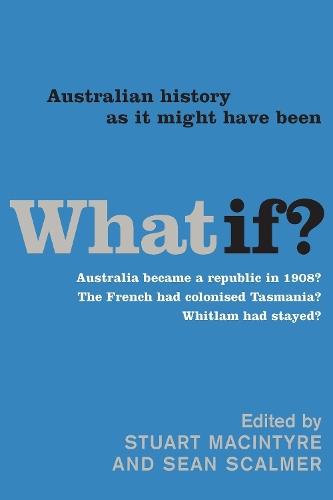 What if key episodes in Australia’s past had turned out differently? If France had colonised part of Australia in the eighteenth century? If the ANZACS had played only a minor role in the Gallipoli landing in World War I? If Gough Whitlam’s Labor government had been re-elected after its dismissal in 1975? If Aborigines had been granted citizenship much earlier? What new paths might our national history have followed? In this fascinating volume, leading Australian historians search for answers. Together, they reimagine Australia’s environment, race relations, art, political life, and national identity, providing a play on actual and possible, action and result, result and consequence that is as rigorous as it is creative. In the political realm, Jim Davidson asks What if Tasmania had become French?; Marilyn Lake wonders what would have happened had Alfred Deakin made a declaration of Australian independence; Helen Irving questions where we’d be if Federation had failed in 1900; James Walker asks What if Whitlam had won another opportunity to implement his program? The cultural questions include Peter Read asking What if Aborigines had never been assimilated?; Sean Scalmer examines the possible outcome if the attempted assassination of Arthur Calwell had been successful; and Ann Curthoys asks What if a men’s movement had triumphed in the 1970s? What If? asks how our history has been written, what our nation has become, and what it might yet be.