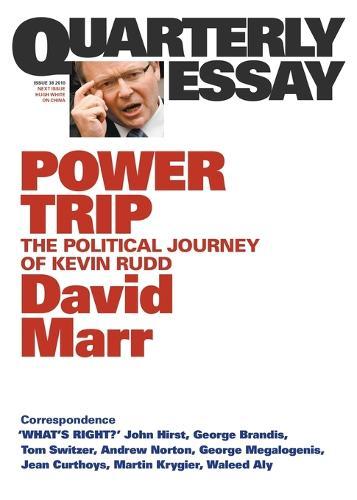 Power Trip shows the making of Kevin Rudd, Prime Minister. In Eumundi, where Rudd was born, David Marr investigates the formative tradegy of his life- the death of his father and what came after. He tracks the transformation of a dreamy kid into an inplacably determined youth, already set on the prime ministership. He examines Rudd’s years as Wayne Goss’s right-hand man in Queensland, his relentless work in federal Opposition - from Sunrise to AWB - and finally his record as prime minister. In Rudd’s Queensland years, Marr finds strange patterns that will reoccur- a tendency to chaos, a mania for contral and a strange mix of heady ambition and retreat. All through this dazzling and relevatory essay, Marr seeks to know what drives an extraordinarily driven man. As Power Trip concludes, he enters into a conversation with the prime minister in which much becomes clear. ‘Rudd has sold himself to the Australian people as a new kind of leader- a man of intellect and values out to reshape the future. If he isn’t that, people are asking, what is he? And who is he?…Millions of words have been written about him since he emerged from the Labor pack half a dozen years ago, but Rudd remains hidden in full view.’ David Marr, Power Trip

Ah, David Marr. No wonder he is the darling of the political left. The man can not only write, but entertain. And he doesn’t just analyse politics in terms of a horse race (or any other sporting analogy). He gets deep into the marrow of his subject, finding the intrinsic human element at its heart.

Here, he asks the question ‘who is Kevin Rudd?’, looking at his personal and political history, talking to those who’ve grown up with the man, gone to school with him and worked with him. He even gets an interview with Rudd himself – and bravely reveals a confronting encounter with the PM, his glimpse of the anger he believes is the driving force between Rudd’s politics, values, blistering work ethic and drive to succeed. In Canberra, he says, Rudd is seen as ‘a weird guy and a failing prime minister’. As a child, he was ‘a fussy little dreamer’. A former colleague says Rudd is a ‘formidable bureaucrat’ with a ‘computer-like mind’ but lacks political ‘feel’.

This is a nuanced, layered portrait, finely analysed. And it’s an absolute page-turner. Really.

END_OF_DOCUMENT_TOKEN_TO_BE_REPLACED

Dark Victory: How a Government Lied its Way to Political Triumph

Singing Saltwater Country: Journey to the Songlines of Carpentaria

A Merciless Place: The Lost Story of Britain’s Convict Disaster in Africa and How it LED to the Settlement of Australia