Memoirs of a Chinese Marshal: The Autobiographical Notes of Peng Dehuai (1898-1974) 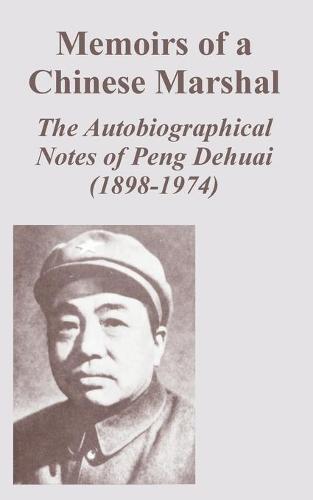 Memoirs of a Chinese Marshal: The Autobiographical Notes of Peng Dehuai (1898-1974)

This book gives a unique personal glimpse of modern Chinese history from the beginning of the century to the Cultural Revolution through the eyes of one of the builders of the Chinese Red Army. Born into a poor peasant family in Hunan Province, Marshal Peng Dehuai (1898-1974) enlisted in 1916 in one of the old warlords' armies. While rising through the ranks to become a regimental commander, Peng Dehuai worked underground to organize soldiers' rights groups. He joined the Communist Party shortly before leading the Pingjiang Uprising in 1928 against reactionary rule. After founding the Third Army of the Chinese Red Army, Peng Dehuai went on to a brilliant career as an eminent commander before and during the epic Long March, in the War of Resistance Against Japanese Aggression and the War of Liberation, and in the War to Resist U.S. Aggression and Aid Korea. After Liberation in 1949, he senred as Vice-Premier of the State Council and Minister of Defence. Marshal Peng Dehuai fell into political disgrace in 1959 after addressing a letter to Chairman Mao Zedong pointing out some of the problems in the Great Leap Forward . Under virtual house arrest for most of the last 16 years of his life, Marshal Peng did manual labour and wrote biographical notes in response to demands for confessions . He died under persecution during the Cultural Revolution on November 29, 1974. Exonerated by the CPC Central Committee in 1978, Marshal Peng Dehuai has been restored to his rightful place in history as one of the greatest military leaders in China’s revolution.