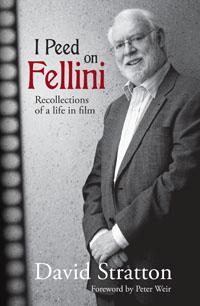 I Peed On Fellini, the long-awaited memoir from legendary film critic David Stratton, is an honest, funny and thoroughly entertaining journey through a remarkable life in film.

Passionate since boyhood about the cinema, Stratton has reviewed thousands of movies, directed and adjudicated at international film festivals, and lectured in film history at the University of Sydney. His best-known role, however, has been as the co-host, with Margaret Pomeranz, of The Movie Show on SBS and, more recently, At the Movies on the ABC.

A recipient of both the Longford and Chauvel Awards for his contribution to the Australian film industry, Stratton’s hallmarks are his incredible depth of cinematic knowledge, his passionate opposition to censorship and his lifelong commitment to quality film. In this outstanding memoir, he tells his story with candour and verve.

David Stratton’s memoir (surely a strong contender for title of the year) is aptly subtitled ‘Recollections of a Life in Film’. It charts his journey from film-mad British schoolboy to eminent Australian film critic, whilst showcasing his encyclopaedic knowledge of cinema. Although probably best known in Australia as co-presenter of The Movie Show and At the Movies, Stratton’s involvement in the international film world goes considerably deeper.

The range of people he has met over the years – from Joseph von Sternberg to Quentin Tarantino – is staggering. We’re even given an oblique glimpse of youthful liaisons with Scandinavian actresses. On the home front, Stratton’s dedicated opposition to censorship is strongly evident when he recalls his time as director of the Sydney Film Festival. Later, his views about the unhappy circumstances behind the move from SBS to the ABC, and the difference between today’s Australia and the one he emigrated to make very interesting reading.

This frank and at times funny book is a must-read for film buffs. And, yes, an overawed Stratton did have an unfortunate encounter with Fellini at the 1966 Venice Film Festival!