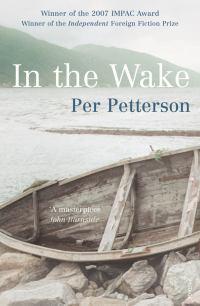 Arvid has lost his parents and his two younger brothers in a ferry accident. Only he and his brother are left alive. The novel he is writing about his father is stalled, the grief and guilt he feels at having survived are too overwhelming. It is as though Arvid has become dislocated from the flow of life. His only human contact is with his Kurdish neighbour, and a woman whom he glimpses in the flat across the street, whose face seems to mirror his own loneliness and loss. Then slowly, the memories begin to return- of his childhood, of his father, of his two younger brothers. He begins to write again.Poignant, restrained, and at times unbearably moving, IN THE WAKE is informed by terrible tragedy, and by man’s sense of the beauty of the natural world, at times our only source of solace.