For Your Freedom and Ours: The Kosciuszko Squadron - Forgotten Heroes of World War II 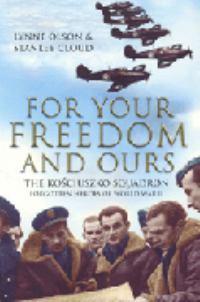 For Your Freedom and Ours: The Kosciuszko Squadron - Forgotten Heroes of World War II

Members of the Polish air force fought through the defeat of their own country in 1939 and then alongside the French until the fall of France the following year, when they made their varied ways to Britain. There, the Poles were among the Air Force’s most successful aces. During the Battle of Britain, the pilots of the all-Polish Kosciuszko Squadron - 303 Squadron to the RAF - downed more German planes than any other squadron. According to Britain’s wartime air force minister, without the Poles ‘our shortage of trained pilots would have made it impossible to defeat the German air force and so win the Battle’. This gripping book tells the story of the Polish pilots, focusing on a small group of five of them, from defeat in Poland and France to victory in the Battle of Britain, from their idolisation by the public to the harrowing story of their betrayal, and Poland’s, by Britain and the USA as the war came to its closing stages. This is an utterly fascinating story, heroic, inspiring and finally tragic, strikingly well-told.