Sea of Dangers: Captain Cook and his Rivals 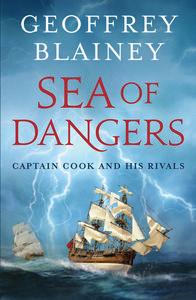 Sea of Dangers: Captain Cook and his Rivals

James Cook and his rivals vie to open up the Southern Hemisphere and claim sovereignty Two ships set out in search of a missing continent- the St Jean-Baptiste, a French merchant ship commanded by Jean de Surville, and the Endeavour, a small British naval vessel captained by James Cook. Distinguished historian Geoffrey Blainey tells the story of these rival ships and the men who sailed them. Just before Christmas 1769, the two captains were almost close enough to see one another - and yet they did not know of each other’s existence. Both crews battled extreme hardships but also experienced the euphoria of ‘discovering’ new lands. Sea of Dangers is the most revealing narrative so far written of Cook’s astonishing voyage. It also casts new light on the little-known journey by de Surville; Blainey argues that he was in the vicinity of Sydney Harbour months before Cook arrived. ‘A master storyteller’s account of the way fantasy and rumour have driven science and exploration’ - Weekend Australian ‘Blainey’s characteristic curiosity raises new questions about Cook and his reputation’ - The Age