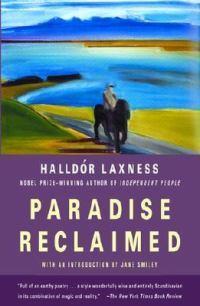 The whimsical hero of this long-lost classic is Steinar of Hlidar, a generous but very poor man living peacefully on a tiny farm in nineteenth-century Iceland. Steinar is the possessor of an unusual pure-white pony, one that his two children believe has fairy blood and which he repeatedly refuses to sell to his richer neighbours, wanting to preserve the children’s idyllic fantasy world as long as possible. But when Steinar impulsively offers his family’s prized pony to the visiting King of Denmark, he sets in motion - in true fairy-tale fashion - a disastrous chain of events that leave his family in tatters and himself at the other end of the earth, in America. His quixotic attempt to prepare a paradise for his loved ones there, among the devout polygamists in the Mormon Promised Land of Utah, results in their spectacular ruin. By the time the broken family is reunited, Halldor Laxness has spun his trademark blend of compassion and comically brutal satire into a moving and spellbinding enchantment, composed equally of elements of fable and folkore and of the most humble truths. 1)SUCCESS OF INDEPENDENT PEOPLE: Vintage’s reissue of Laxness’s novel revived interest in a forgotten classic: the Vintage edition has sold more than 50,000 copies in 13 printings. 2)LAXNESS CENTENARY: Laxness is a favourite of such writers as Annie Dillard, Annie Proulx, and Jane Smiley